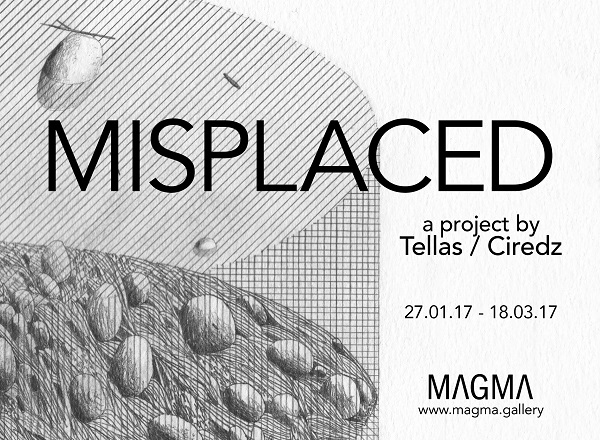 In addition to the display of a series of unreleased artworks, the gallery will exhibit an installation in the main hall, created with recycled materials. The aim will be that of representing, in a powerful and evocative way, both the geographical and spiritual disorientation, and the twisting of the comforting relationship between man and nature.

The collaboration between Tellas and Ciredz is anything but new; in 2015, the two artists worked side by side on the project Becoming Marni, realizing a great number of public murals and installations in Sergipe, Brazil. This project was presented at the 56th Venice Biennale, with the documentary “A grande terra do Sertão”.
Misplaced tells us about changes: the environmental ones, irreversible transformations caused by man; the spiritual ones, which transmute all our intimate points of reference; and, not the least, the geographical ones, turning man into a wayfarer, lost in a boundless world.

Tellas (Cagliari, 1985) In 2015 The Urban Contemporary Art Guide, curated by Graffiti Art Magazine, listed him as one of the 100 best international emerging artists. In 2014 the Huffington Post USA included him among the 25 most interesting international artists.

Ciredz (Cagliari, 1981), is one of the most innovative artists of Italian urban abstract art. His works have been appreciated in numerous exhibitions and national and international events, such as Katowice Street Art Festival in Poland, Muu Festival in Croatia, Asalto Festival and US Barcelona in Spain, and the well-known Village Underground Wall in London