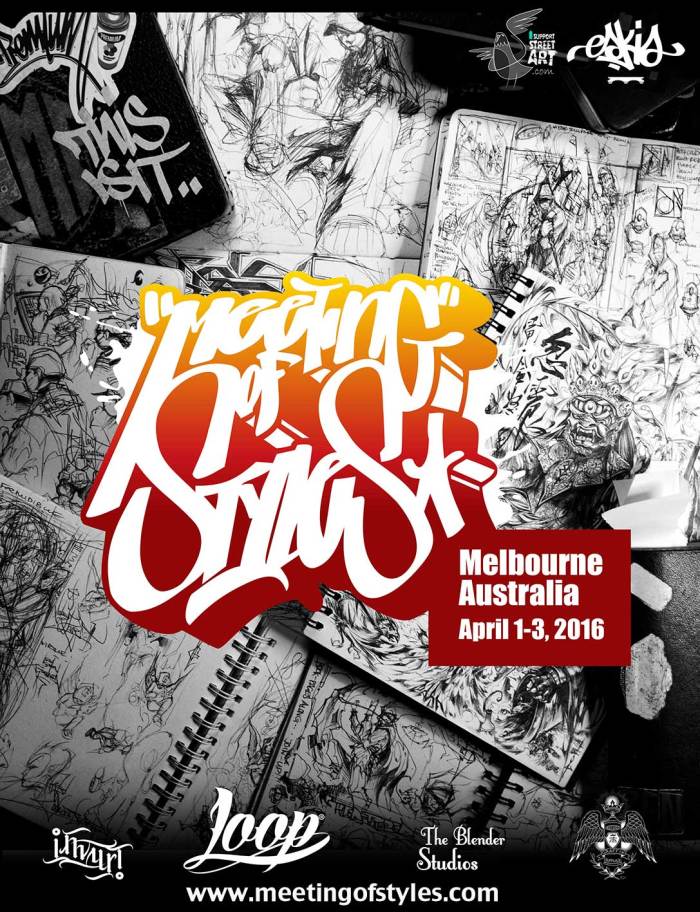 For the first time MOS expands its horizon past Asia to Downunder! The chosen city is Melbourne, wellknow worldwide for its strong and long history of Graffiti!

Melbourne will witness an event like never before – and it’s about time, too. Meeting of Styles, an internationally renowned graffiti and arts festival is finally coming to Melbourne.
It’s hard to believe that this iconic festival hasn’t made it down to Melbourne yet, but its better late than never!

So you can find your way around, locations and a convenient walking guide will be available at all the MOS sites during the event.

MOS started out in Wiesbaden, Germany in 1997 in a huge abandoned area known as the “Schlachthof Wiesbaden”, an abandoned slaughter house. Originally known as the “International Wall Street Meeting” the event attracted thousands of visitors from across Germany between 97 and 2001.

Over the years, the slaughter house evolved into a hall of fame, until 2001 when it was announced it would be converted into a carpark, signifying the end of the hall of fame. In 2002 the event was revived and its name changed to “Meeting of Styles”.

From the MOS website: “Since the foundation of Int. Meeting Of Styles back in 2002 more than 250 events have been realised worldwide attracting more than 500000 spectators and thousands of artists from all over the world. MOS brings people together, creates publicity, supports the netting and enables intercultural cross-boarder-cooperation. It is an example how a better world of tomorrow might be possible.

Artist line up, locations and after party details will be published here closer to the date.