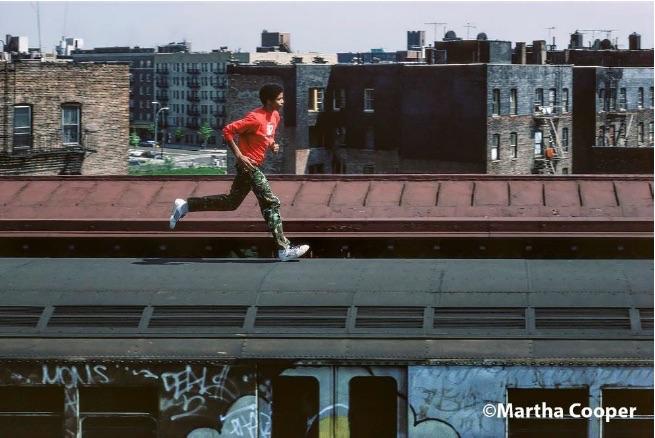 Combining photographs and personal artifacts, MARTHA COOPER: TAKING PICTURES will be the world’s biggest retrospective of Martha Copper’s work to date. It will trace her life from her first camera in nursery school in 1946 to her reputation today as a world-renowned photographer. This retrospective will be the first documentary exhibition to be presented at the URBAN NATION Museum and it ushers in a new era for the museum under its new director Mr. Jan Sauerwald.

Skeme, Bronx, NYC, 1982 photo ©Martha Cooper
MARTHA COOPER: TAKING PICTURES will present the photographer’s versatile vision of the world, with creativity found on every corner. The exhibition will open with the images from Subway Art, her landmark 1984 book with Henry Chalfant, now credited with jump-starting the worldwide urban art movement. Martha’s photographs documented the secret subculture of writers and the coded artworks they created illegally on thousands of New York City trains.

Martha’s photographs are distinguished by their frank human vitality, with an eye to preserving details and traditions of cultural significance. Many of her photographs have become iconic representations of a time, place or culture. The exhibition will offer a rare insight into Martha’s archives through previously unpublished photographs, drawings, journals, articles, letters and artifacts. As a lifelong and avid collector, her private trove of black books, stickers, Kodak film wallets and toys made in her childhood will also be on display. Emphasis will be placed on Martha’s extensive travels and the artistic friendships that she has fostered internationally.

Fans will recognize images from her books Hip Hop Files (with Akim Walta, 2004), Street Play (2005), We B*Girlz (with Nika Kramer, 2005), New York State of Mind (2007), Name Tagging (2010), and Tokyo Tattoo 1970 (2011). As an exhibition highlight, the original mock-up of her legendary book Subway Art (with Henry Chalfant, 1984) will be on display, as well as artworks from her personal collection including a pair of original paintings by graffiti king, Dondi.

A multi-channel video installation by filmmaker Selina Miles called “The Rushes” will debut in the exhibition. Miles directed the documentary Martha: A Picture Story which premiered at the 2019 Tribeca Film Festival in NYC.

An extensive section called “Martha Remixed” showcases the work of over 35 artists who have reinterpreted Cooper’s photographs or paid personal tribute with portraits, in an array of styles and mediums and locations. Unique to the exhibition, visitors will see the new collaboration between Martha and multidisciplinary Lithuanian artist Ernest Zacharevic who will create a two-story mural on site inside the museum.

“We were immediately excited to be given the opportunity to present the world’s first major retrospective of photographer Martha Cooper and to introduce her body of work to URBAN NATION Museum visitors. We are interested in focusing on Cooper’s photographic work and expounding on her working methods. In addition, we will present her worldwide collaborations with artists and protagonists of the street art and graffiti movement and provide audiences the opportunity to delve deeply into the cosmos of Martha Cooper’s work. We are delighted to be able to present and convey a unique compilation of photographs and artifacts from her personal collections.” – Jan Sauerwald, Director of the URBAN NATION Museum.

Martha’s speciality is documenting artistic process in public spaces. Her formal training in art and ethnology set a unique template to better understand cultural practices and techniques, and her friendships with artists gave her close and personal access to show materials, tools and techniques in detail as they evolved over several generations. As part of this larger practice, Cooper’s iconic photos of clandestine graffiti activities have proven to be a valuable record and an important key to understanding the story of the movement’s proliferation around the world.

Martha’s curiosity has always driven her documentation. Her black and white photographs from her book Tokyo Tattoo 1970 (2011), represent her first foray into an underground art world and hidden practices. In Street Play she concentrated on the invincible spirit of city kids who are creatively rising above their bleak environment. Her photographs of 1980s breakers are the earliest published images of an unknown dance form at the time that became known as central to the definition of Hip Hop culture. As the first female staff photographer on the New York Post, Cooper sought out subjects to pursue independently. Her intrepid and sometimes risky pursuit of taking pictures has inspired many young people to pursue their own artwork and career paths.

“Martha’s style is to dive in and be fearless, immersing herself in the moment – and she’s been documenting what she finds around the world for six decades. That’s the attitude we took curating this exhibition, knowing that each element captured in her work is genuine and transient. It is our goal for visitors to be transformed by her unique eye for a historic preservation of the ordinary that is often exceptional – whether it is documenting the verboten process of making 1970s graffiti, capturing youths performing moves that were later called “breaking”, the inking processes of Japanese tattoo culture, or the ingenious games kids devised for play in New York’s abandoned neighborhoods,” say Harrington and Rojo about MARTHA COOPER: TAKING PICTURES.