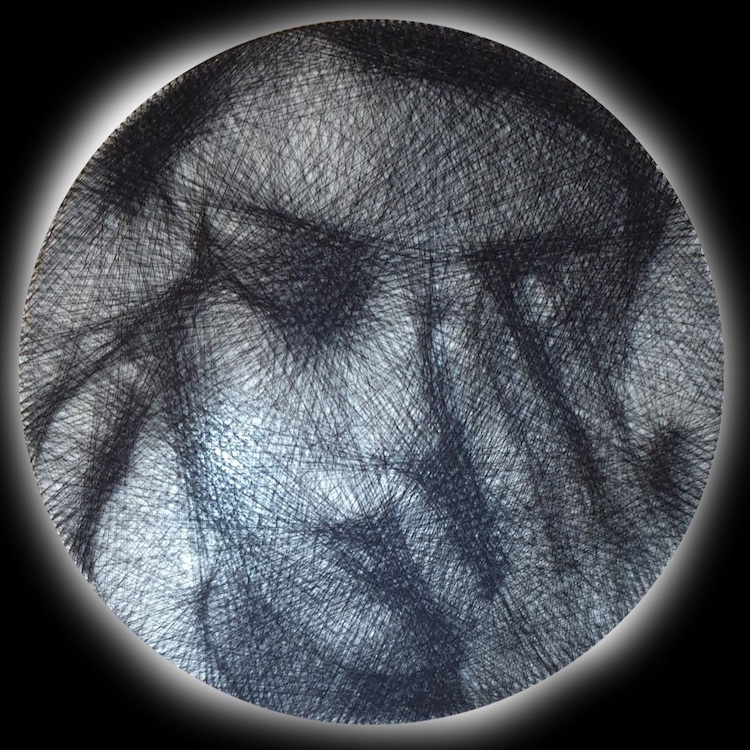 LOST AND FOUND is a sublimely unique exhibition from Perspicere- a street artist with his own (literal) twist on the medium.

London based artist Perspicere, Latin for perspective, makes street art made from single kilometre long pieces of thread. His first solo show ‘LOST AND FOUND’, is themed around the emotions that Perspicere and many others have experienced as a result of lockdowns. The images paint a picture of a society emotionally lost due to the pandemic.

Known for his large 3d string installations, one of his most notable large-scale works was Screaming Man on Shoreditch High Street which reflected the frustration he felt after a 6 month long creative block. Unfortunately, the installation got set on fire within 2 hours of the artwork being completed, but Perspicere remains non-plussed, “Once it’s done it’s done.”

His smaller works are photorealistic portraits, made by wrapping thread around nails in the way that a line drawing might be made without taking the pen off the paper. He creates these unique artworks by using a single piece of unbroken sewing thread. Beginning as a single line, the work then evolves into a complex, crisscrossed piece of art.

‘LOST AND FOUND’ will feature 4 large installations and 10 framed works. One of the key pieces is a metre and a half picture of a skull, which Perspicere originally made on the street before cutting it down and putting it in the exhibition. Each piece will be accompanied by a QR code that takes you to a video of the artworks being made.

The exhibition opens at London’s BSMT gallery with a private view on August 19th, with the show running from August 20th to 29, 2021. To attend the opening night RSVP via [email protected]