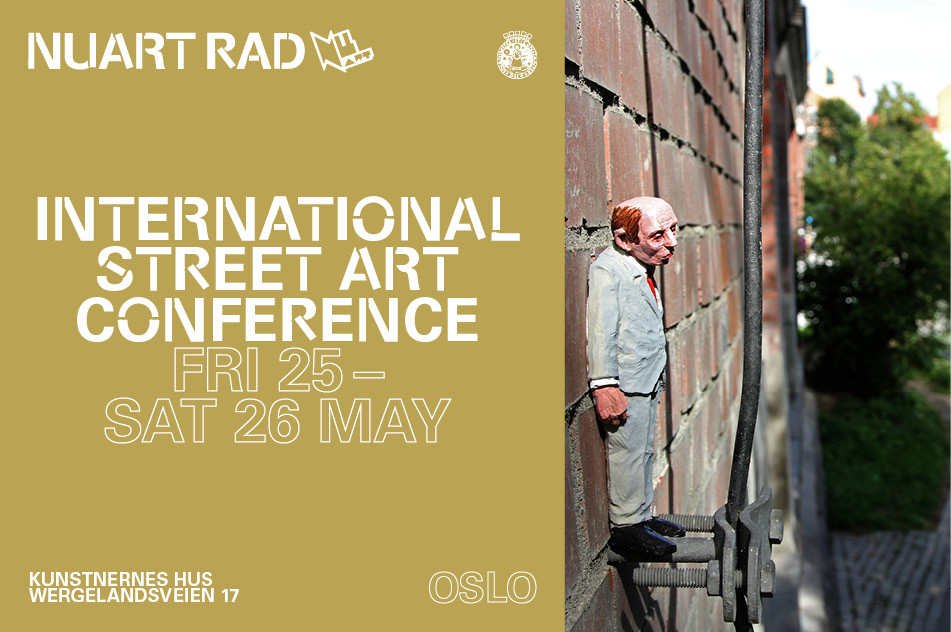 Oslo Municipality and the world’s leading street art festival, Nuart Festival, have collaborated on a joint project that deals with art in public spaces.

As a mark of the 50th anniversary of the student riots in Paris, the first phase of the project will culminate in a two-day event from 25-26 May in Oslo that investigates the relationship between street art and activism. The program over two days includes artist presentations, panel debates and film screenings.

International artists, academics, researchers and curators will gather at Kunstnernes Hus, Oslo to discuss how street art is challenging centuries of tradition by once again making art a part of everyday life.

To illustrate this, leading international street artists Carrie Reichardt (UK); a self-proclaimed ‘craftivist’;  and Julien de Casabianca (FR); founder of the Outings Project, a global participatory art project; will be producing a number of artworks along the Akerselva river. They will also share their reasons why they choose to circumnavigate traditional routes into the art world during a day of talks on Saturday 26th May.

Together with Isaac Cordal (ES), Hama Woods (NO), Jussi TwoSeven (FI) and Martin Whatson (NO), Reichardt and de Casabianca are among artists who have been invited to produce both temporary and long-term artworks along the river.

The event is free and open to everyone.

“Street Art, like the Situationists and Dada before it, seeks to remove the boundaries between art and everyday life. Old industrial buildings, city streets, the Internet and mass media are increasingly replacing museums and galleries as the ideal forums and exhibition venues for art. Dada gave us the groundwork for abstract art and sound poetry, is the starting point for performance art and free theatre, a prelude to postmodernism, an influence on pop art, a celebration of anti-art and is the movement that laid the foundation for Surrealism. It gave us collage, cut up, paste-ups, photomontage, assemblage, readymades and happenings.
It would later be embraced for anarcho-political uses in the 1960s by, amongst others, the likes of the Lettrist’s and Situationists. It would indirectly inform Malcolm McLaren’s idea of Punk which in turn would influence the development of hip hop culture in the Bronx (which had already decided the city was its canvas). It laid the foundation for culture jamming, ad busting and artivism. It was not a movement, but a mentality. A mentality shared by many of those participating in this event.”

“It’s a real honour to be invited to Oslo and to be able to create some ceramic street art for the city. I’ve really enjoyed researching the working class history and cultural heritage of the areas surrounding the Akerselva and can’t wait to visit for myself shortly.”

The project sees the area adjacent to the Akerselva river – which stretches for 8.2km through the centre of the city – become a venue for a new public art program that seeks to make art a part of everyday life. The Akerselva – historically viewed as something of a socio-economic and racial dividing line between east and west – becomes a stage for new kinds of stories and art forms to emerge.

The project aims to celebrate the diversity of the four neighborhoods through which the river flows – Nordre Aker, Sagene, Grünerløkka and Gamle Oslo – and to encourage new ways of engaging with each other and our surroundings through the creation of a multi-disciplinary ‘art trail’.

Nuart Festival produces both temporary and long-term public artworks as well as facilitates dialogue and action between a global network of artists, academics, journalists and policy makers surrounding street art practice. Our core goal is to help redefine how we experience both contemporary and public art practice: to bring art out of museums, galleries and public institutions onto the city streets and to use emerging technologies to activate a sense of public agency in the shaping of our cities.

Their work is based on the principle that art should be part of people’s everyday lives and guided by our belief in the capacity for the arts to positively change, enhance and inform the way we think about and interact with each other and the city.

Nuart Plus is the name given to our activities outside of physical art production, with the aim to explore and present issues surrounding contemporary Street Art practice in all its guises, through both entertaining and educational projects and programs. Nuart Plus events feature contributions from some of the worlds’ leading street artists alongside academics, authors, researchers, curators, producers, writers and other cultural-sector professionals who are dedicated to exploring issues surrounding new forms of art and activity in public space. www.nuartfestival.no

For more information and to reserve tickets please visit: https://www.eventbrite.co.uk/e/nuart-rad-international-street-art-conference-tickets-45640365562