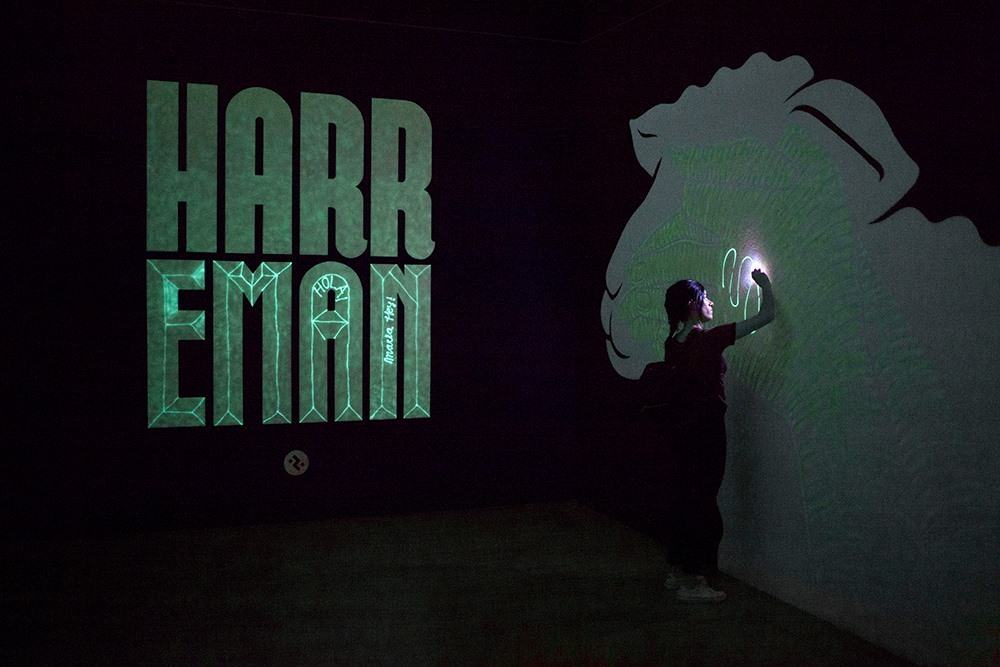 After making murals and photoluminescent installations in places such as Austria, Texas, Romania, French Basque Country, Catalonia or Aragon, Reskate presents for the first time the HARREMAN project in Barcelona. In this exhibition the artistic collective reflects on the aspects that establish a relationship between two elements.

The exhibition, which shows topics about memory, historical data and the etymology of language with irony, presents a use of photoluminescent painting that allows multiple appearances in the same work.

The collective focuses on this material, exploiting its communicative power to the maximum in a space specially prepared for it. The viewer, through the use of lights, becomes an active participant, interacting with the works and creating responses to their actions.

After a long process of research into the application of this special pigment by manual screen printing, the resulting work is presented in a sample consisting of several pieces of a limited edition. For this occasion, Reskate has had the support of Soluciones Luminiscentes SL, regular collaborators of the group in the realization of their photoluminescent murals.

A Basque word that means relationship. It’s formed by the verbs HARTU (Receive) and EMAN (Give).
This project draws on reminiscence and the etymology of language, with an occasional nod to irony and showcases the use of photoluminescent paint, allowing multiple readings of the same work. Through the use of lights, the observer becomes an active participant; interacting with the work and creating its response to those actions.
By these interventions in the public space the intention is to try to light up dark corners of cities, both installing new lights and encouraging citizens to interact with the wall, painting with light on it.

CONVERSATION ABOUT THE PROJECT ON 23 November, Facebook event here