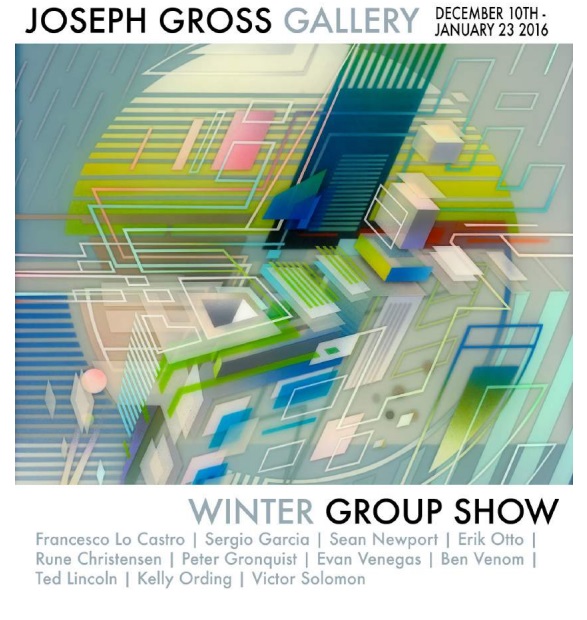 This exhibition incorporates a diverse range of artistic styles and backgrounds — from paintings to quiltwork to wood sculpture — and offers the opportunity for artists to debut new work in a complex and evocative dialogue between contemporary mediums. 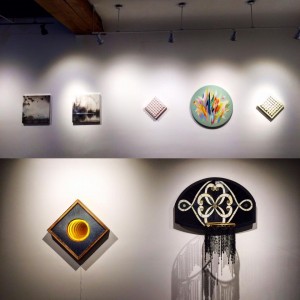 Thoughtfully curated to allow for a more multifaceted and global narrative, Winter Group Show represents perspectives from compelling multinational artists who are reinventing and pushing the boundaries of convention. 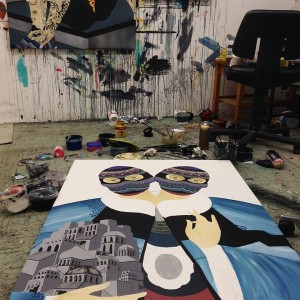 Rune Christesen for the exhibition

Ben Venom, fresh off his residency at the de Young Museum, San Francisco, plays with meaning and madness and creates hand-made quilts that pair the most shocking visual components of counterculture with the time-honored tradition of crafting. In this unorthodox twist, his meticulously stitched quilts offer representation to the extreme social elements found at the fringes of normal society. By juxtaposing imagery from motorcycle gangs, vintage tattoos, horror and the occult with the conventionally comforting medium of quilting, Venom questions the assumed value of the subject and its representation — and creates meticulously stitched, punk rock quilts that would put your grandma to shame.

Evan Venegas was born in 1975 and raised in Queens, New York. Creating what he considers “playgrounds of the mind,” Venegas pushed the boundaries of realistic representation by using it to depict imaginary objects. Evan began painting with oils at a young age; the child of a latin jazz musician, his work reflects the orchestral composition of a strong musical influence. Most intrigued by the modern sounds of electronic music, Venegas hopes to create images which convey the pulse and rhythm of urban existence. His work offers an openended and unconventional visual representation that encourages his audience to unite the auditory with the visual.

Rune Christensen, born in the East Jutland, is a self-taught graffiti artist and traveler who incorporates imagery and patterns found across the world in the creation of his signature faceless portraits. Captivated by the variety of ornamental motifs, patterns and colors of cultural and religious decoration, Christensen utilizes the photographs taken during travel and memories from Asia, South America, North Africa and Native America to blend the visual elements of design work with global tradition. His paintings offer detailed representation to female heroines with faces usually hidden or obscured and skins adorned with intricate designs. The tattooed women stand out against backgrounds that are as minimal as the characters are intricate; only cryptic reference is given to the shapes of men and children in in the background, leaving the audience to interpret the meaning of their absence.

Victor Solomon, a stained glass artist, makes unconventional use of the medium to arresting effect. Solomon’s luxury basketball hoops are created out of materials historically reserved for the royal, religious and opulent, with stained glass backboards that symbolize not only a devotion to to the court but elevate the role of the athlete in modern society. Having apprenticed for a year under veteran glass masters, Solomon renders these works with tremendous discipline and fidelity to the traditional Tiffany style -— meticulously cutting, soldiering and shaping the glass, hand-weaving the customized net, and gold-plating the rim in his luminous and intricate compositions. At once elegant and playful, his work is an evocative symbol of luxury that explores the grandeur of the medium by embracing the athlete as metaphorical king of the court.

Italian-born artist Francesco Locastro draws inspiration from the delicate balance between form and function. His sleek paintings and three-dimensional designs pair the soothing, neutral quality and linear minimalism of understated interior designs that are intended to comfort and pacify without attracting the direct attention of the viewer. Fascinated with the ubiquitous safety design elements present in public institutions, hospitals and care units, Locastro’s exploration of this unique interaction attempts to break down the elements of visual communication and replicate their effect, resulting in abstract designs as beautiful as they are unobtrusive. Sean Newport is a San-Francisco based artist whose geometric wall-mounted structures manipulate color, light, and shadow. Often mistaken at first for a flat graphic, his three-dimensional wooden sculptures play with the boundaries of reality and the preconceived notions of the viewer by exposing the flaws of visual perception. By manipulating wood into three-dimensional shapes (which are then painted with his vibrant and mesmerizing designs), Newport is able to attain a digital aesthetic that is created through analog methods and altered by physical perspective.

Erik Otto is San-Francisco based artists who depicts “fleeting moments of change and discovery” that are reinvented continually. Utilizing a wide range of mediums and found materials, Otto’s illustrations often center around themes of peace and chaos. Both dreamlike and refined, his painted work plays with concepts of order and disorder and the blending the boundaries between serene tranquility and underlying destruction.

Kelly Ording’s works pair the intuitive with the calculated in a blend of organic and geometric shapes; her precise and mathematical linework amplifies the singular shape, transforming it into a complete image by the process of repetition. Ording’s meditative work constructs a more abstract narrative landscape, with lines that build upon each other and bring the viewer into conversation with the piece directly as they experience it. Instead of aiming to directly represent a story from the artist’s life, the pieces themselves depict a creative process and evolution that allows the viewer to interpret build their own narrative experience out of the resulting imagery.

Ted Lincoln uses a variety of techniques to create works that explore the transitory nature of landscape, drawing upon his cultural background and experiences as well as the influence of both eastern and western cultures, philosophies, and practices. Using industrial materials such as steel, aluminum, acids, and automotive enamel to create his work, the austere nature of his materials are softened and rendered into contemplative spaces that simultaneously feel both strong and illusive. Sergio Garcia draws inspiration from the unconventional, creating sculptures that pair the unorthodox with the ordinary. It is his desire to stimulate the creative subconscious with the viewer in a way that creates not only an emotional relationship with the sculpture, but conjure up an implicit question about the piece that causes the viewer to think. At the core, the aim of his art is the desire to not only make an impression, but to evoke a human response.

Recently named one of the Top 15 Contemporary Artists to Collect by Business Inside, Portland-based artist Peter Gronquist has been expanding upon his previous body of work through abstraction. Blending the effects of color field painting with offhanded gestural movement, Gronquist has rendered the organic movement of paint on a smooth matte surface to ethereal effect. In what he describes as a “liberation” from the high production value and ironic nature of the work that dominated his early career, Gronquist has produced a series of new work that is visceral, experimental and raw, focused on leaving a mark with inner sincerity.

The diverse artists’ practices represented within Winter Group Show embody Joseph Gross Gallery’s long-standing mission of representing artists who are not only pioneering new genres, but questioning, innovating and reinventing the value of artistic medium.