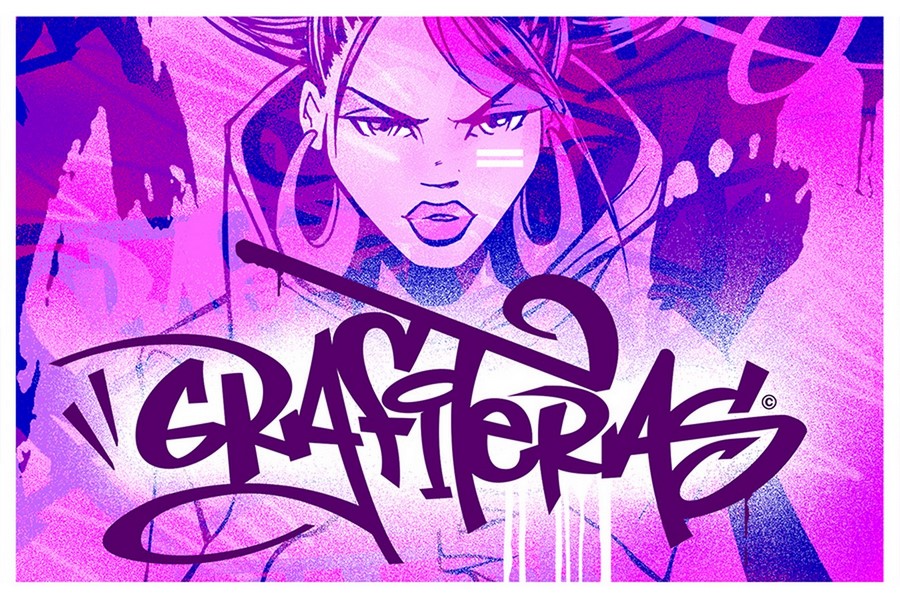 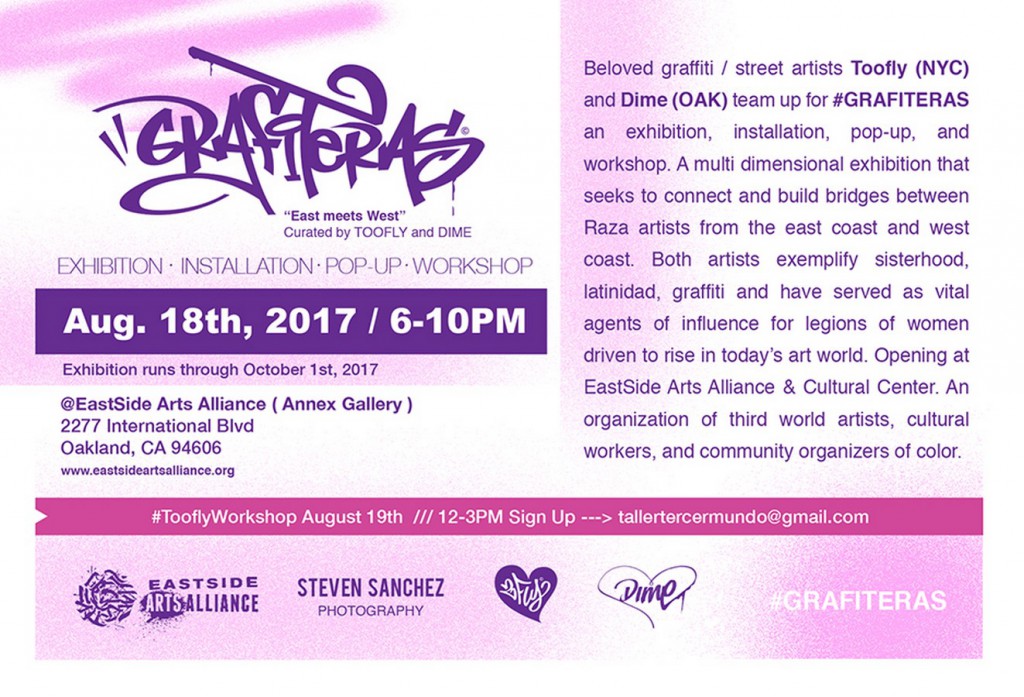 GRAFITERAS is a multi dimensional exhibition that seeks to connect and build bridges between Raza artists from the east coast and west coast. Both artists exemplify sisterhood, latinidad, graffiti and have served as vital agents of influence for legions of women driven to rise in today’s art world.

Both women were raised in the tumultuous 90s era. Toofly hails from Corona, Queens NY, Dime from Oakland, California. As young graffiti artists they made their mark in a male dominated graffiti scene. The challenges of being immigrant and brown women did not deter their journey of self-discovery. In fact, it influenced the trailblazing art they create today. They were determined with mucho corazon which comes from instinctual feelings of love and community. Through their art, they not only represent themselves but the dreams, ideals and instincts of women, particularly Raza women.

Over the years they have carved out an important artistic space at the intersection of street graffiti, murals, and exhibitions—on their own terms, staying true to their roots and love for community. Eventually, the forces of the universe brought them together as grafiteras.

To be “Latina” or to be “Raza” in America means you celebrate two or more cultures through language, art, cultural traditions, music, and food. As daughters of families who at one point migrated to the states in search of greater opportunity and economic security, both women understand the power of their art in telling the story of immigrant families. In the face of struggle in a country of institutionalized racism, racial profiling, and an anti-immigrant legal systems, Toofly and Dime respond with art that uplifts, engages and promotes the inclusion of their communities. They have faced racism, and discrimination and so have their family members and peers. It is part of their lives and what gives them a thick skin in the face of adversity. This is what makes women strong, what makes them warriors. They are part of a growing generation of people of color who stand up for what they believe in and will weaponize their art to share their truths. Resistance is part of their culture, it’s in their blood.

Today, “Latina Americanas” like Toofly and Dime, are also spreading their craft into the broader society as educators, designers, educators, and community organizers. It has become the path of self determination for women artists who hold the roles of mothers, daughters, sisters, and aspiring professional storytellers. As grafiteras they have a complex story that speaks volumes of the strength and love that is needed to inspire and move society. GRAFITERAS is a powerful initiation to the complexity of what it’s like to grow up in America, and how Raza and many other cultures find a way to stand up, rise, and shine through it all.