Trash art pioneer Bordalo II is to launch his largest solo show to date, taking over Lisbon’s new Edu Hub complex with a ‘retrospective’ of all-new work that profiles his recognisable Trash Animal sculptures alongside new, never-seen-before approaches and materials.

EVILUTION is a showcase of Bordalo II’s own evolution as an artist over the last decade. In keeping with the strong environmental message that has underpinned his career, every artwork on display has been created entirely from objects that have been thrown away, salvaged by the artist and his team.

Works include scaled down versions of the Big Trash Animals he is most famous for, which have wowed the public everywhere from Paris and London to San Francisco and Bora Bora. Like their larger cousins, these Small Trash Animals have been created using an array of urban waste, ranging from scraps of metal and plastic toys to hoses, ropes and marine debris.

Alongside these more recognisable pieces – and demonstrating the way his style is evolving – Bordalo II will unveil an exciting range of artworks that incorporate materials never used in his work before, including offcuts of wood, mosaics of empty spray-paint cans, and a stunning selection of Trash Animals crafted entirely from discarded neons.

Long-known for a body of work that highlights issues of environmental sustainability and biodiversity, these themes run through the heart of EVILUTION, challenging visitors to consider the impact that humanity is having on the natural world – and the enormous variety of objects that we discard every day. 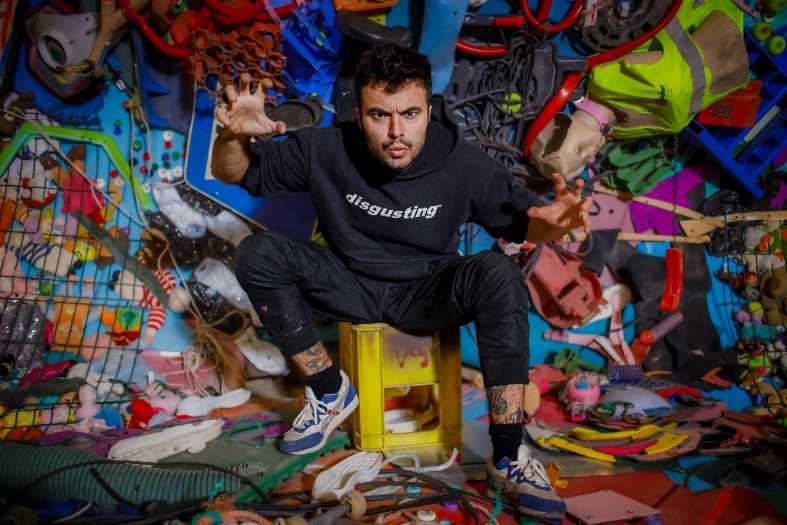 Bordalo II says: “It’s unbelievable what people throw away. Many of our sculptures use obvious household trash, but we want to show that there’s a whole ecosystem of junk laying around out there that is threatening nature. That includes things like generations of broken neon tubes, which most people wouldn’t ever think about.”

The exhibition will also an offer an insight into Bordalo II’s background in graffiti, with a section showcasing works inspired by Bordalo’s upbringing in the art world, and his roots in the Portuguese street art scene.

Bordalo continues: “EVILUTION is a kind of retrospective of everything I’ve been doing over the last 10 years, and also a way of looking towards the future. I don’t want to become a one-trick pony; I want to evolve and let my work evolve with me.”