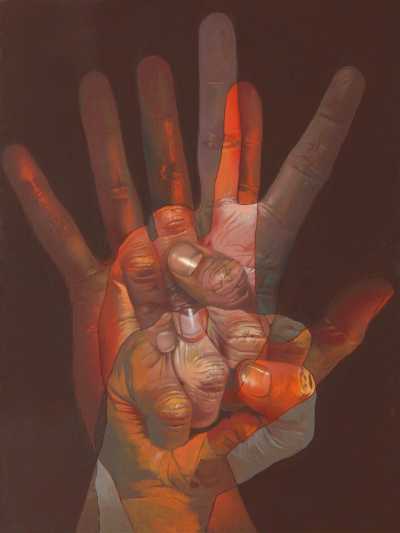 New exhibition about the great artist Case Maclaim. The title “Everyday Robot” refers to the Human’s alienation to a routine which is also dehumanizing. And Case’s canvas denounces this mechanical monotony Case (Andres Von Chrzanowski), born in Germany in 1979, already started his graffiti career in year 1995. In 1999, he founded a crew with AKUT (from the tandem HERAKUT) and RUSK which then became MACLAIM with the addition of the urban painter TASSO.

The “Maclaims” are renowned for being the pioneers of the realistic picture style.

Case’s particularity is composed of very technical paintings superimposing human hands. For several years, he has been painting them with spray cans in larger formats over building walls all over the world.

If we consider the cave stencils from the Paleolithic grottos, hands are one of the oldest subject in paintings. Inspired by propaganda billboards, Case reclaims the image of the hands in street art as a symbol of power and unity. In V, with the first, in the shape of a letter, Case’s pictorial code is a graphic alphabet which almost replaces the traditional lettering of the graffiti. The hands are the ones literally and figuratively signing. In our ultra-digital world, there is a strong meaning in drawing fingers on facades of buildings – in opposition to touch screens.

This is most likely by being directly inspired from a tangible world and its surroundings that we can reach such a level of realism and authenticity.