Laurence Vallières (Quebec, 1986) reengineers the connection between humans and animals. Laurence produces cardboard sculptures of both large and small dimensions that become a three-dimensional mirror that send back to the viewer a transcription of the human being. These mental images open a door that leads to reflection on our activity on the planet and our relationship to our equals, whether they are humans or nonhuman animals. 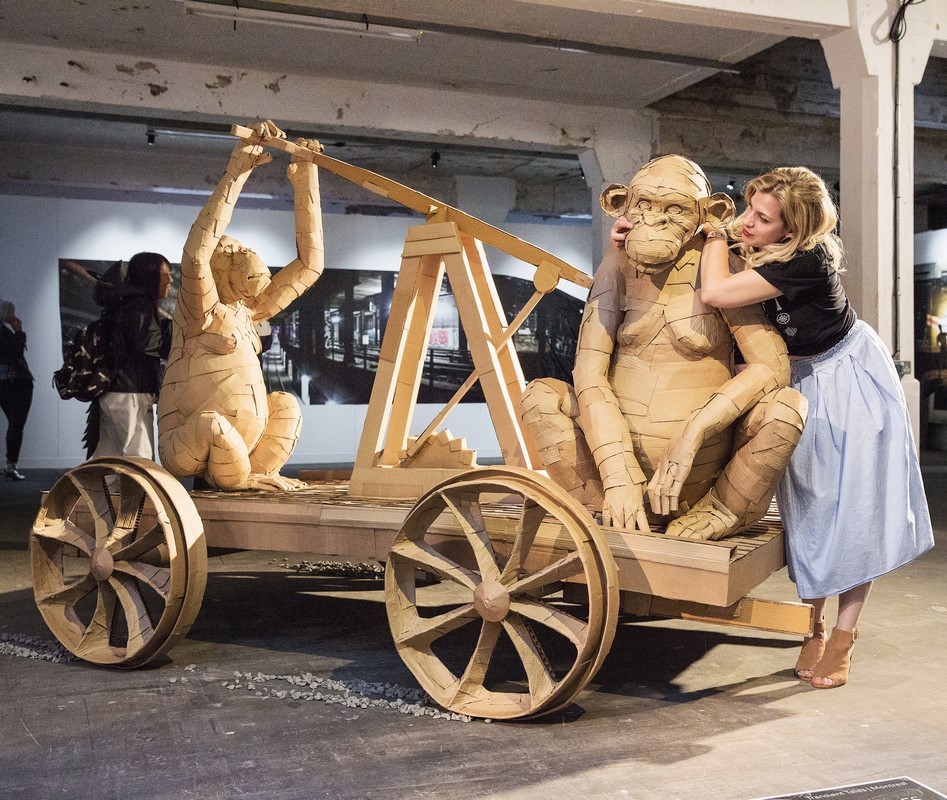 Some people think that the human being is a pest, a parasite that acts in an outrageous way and is annihilating its host, Planet Earth. The term “DISCARDED” refers to all those products generated by humans and that being despised and abandoned by us, become a destructive residue. Much of this waste which is not assimilated by the ecosystem, becomes part of the landscape, and it no longer attracts our attention. Sometimes we even prefer not to see it and it can be found in large quantities in forgotten places.

We are mammals, which live on the Earth’s surface, and that is why the seabed is a good place to hide our shame. The Oceans are our sewers, where everything we discard ends; fattening our oblivion, until it explodes.

That is why Laurence Vallières has decided to explore the marine kingdom for this show, leaving for a time the inhabitants of the terrestrial surface. For “DISCARDED” the artist recreates the ocean garbage dump as it should be, free of human influence, virgin and unexplored.

The artist’s own technique is a conscious result of the terrible human influence on the environment, That’s why she uses cardboard found on the sidewalks of several cities. Waste material collected in the countries she has travelled, saved from the street, and recovered for this exhibition. A “Site-Specific” installation produced during a three-week residence in the gallery itself. The appearance of trademarks on the skins or shells of her animals tells us about the footprint that our global consumer culture is leaving on the natural environment.

More than a trace, those consequences are difficult to rectify, and we are all responsible for that.

Born in Quebec city in 1986, Laurence Vallières was discovered by the creation of large-scale sculptures in cardboard. Vallières studied at Concordia University in visual arts before doing an exchange program in Los Angeles to further her knowledge in ceramics. It’s only after graduation and doing an artist residency in Russia that she appropriated the street art influence in her work. By using cardboard, material that she finds in abundance in the street, she can create large work on the spot in every part of the world she goes.

This exhibition has been produced in its main part during a three week residence by the artist in Madrid in collaboration with Petit Palace Hotels.