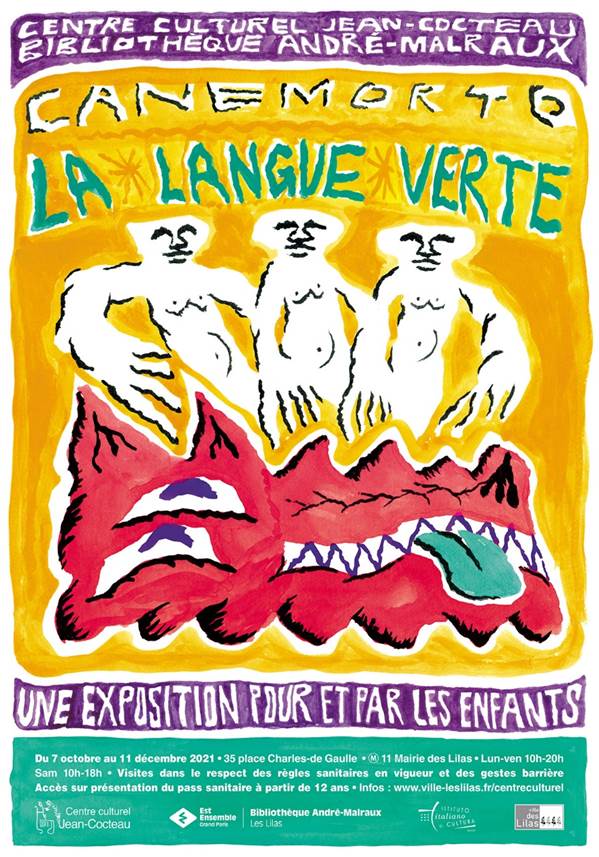 An exhibition for and by children (but not only)! CANEMORTO is a trio of Italian artists based in Bologna. Coming from the underground world of graffiti and urban art,

the collective set out to conquer the world of contemporary art with some of the most original and offbeat work on the international scene. Masked characters with a grotesque look, the trio are guided by the spirit of a dead dog who has charged them with propagating the cult of a free and raw art : the green tongue.

Instinctive, direct and ironic, Canemorto’s work is inspired as much by the masters of European expressionism (CoBrA, Baselitz, Lüpertz …) as by Art Brut to question the vital force of the pictorial gesture and the limits of institutionalized art.

Followers of childish freedom and a wildly colorful expression, Canemorto makes play the driving force behind his creation and takes up the challenge launched by the Jean-Cocteau cultural center and the André-Malraux library: to create an exhibition for and by children. .

For his first solo exhibition in France, Canemorto presents a project entirely thought out on the scale of children. Six large books of the Green Language are placed on the floor of the exhibition rooms of the Jean-Cocteau cultural center, fully covered with a fabric with primitive patterns. The pages of each volume – in disproportionate formats – are inhabited by enigmatic and quirky figures, which the artists have produced with six hands. Simply sketched, these silhouettes are just waiting for the unbridled drawings of the children to transform and take shape, thanks to the colored pencils distributed at the entrance of the exhibition. Children, it’s your turn!