From 22 January to 20 February 2022, this site-specific exhibition project will be open to visitors in the historic and important spaces of the Ex Chiesa di San Mattia in Bologna, in the heart of the city.

In addition to three surprising installations of enormous size, 5 limited edition lithographs, created for the event, will be presented to the public and will be exhibited in the majestic niches of the former church. 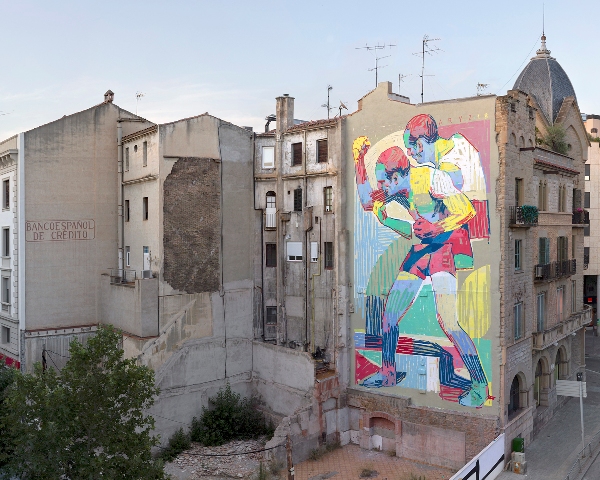 Visiting “El Festejo” means taking part in a strange and amused collective event, whose rhythm is marked by the female characters portrayed. Each of them represents a different nuance of what the title can mean; the figure painted on the gigantic installation – nine meters high by eight long – placed in the apse, for example, welcomes us hiding its gaze, in a fun and seductive game. The other two large installations, of five meters in height each, enhance its dynamism, movement, either through a very balanced dance step in which the figure delicately lifts a hem of a skirt, or instead a sort of ritual struggle between the two figures who challenge each other by pulling each other’s arm. In the lithographs then, the portrayed dancers seem to be waiting to go up on an imaginary stage and start the dance, waiting for that moment with a dreamy look or hinting at a step. Finally, in another lithograph, the female figure embodies another nuance of El Festejo, namely the celebratory one, fulfilling what appears to be a prayer, a very heartfelt, profound plea. In each of these figures, and in what they represent, the visitor can instinctively find himself, letting himself go and thus participating in that party, that celebration, to which Aryz invites us.

The style of this great street artist is unmistakable; the figures are portrayed in what apparently seem to be sketches, preparatory studies of the characters, perhaps a tribute to traditional painting by Aryz. However, these works seem to vibrate, such is the force expressed by those figures that overlap, split or show fragments of their bodies, almost anticipating possible movements.

Soft colors, broad backgrounds, without details, are equally important in Aryz’ style. The effect is that of a timeless yet contemporary painting, capable of projecting the subjects portrayed in a suspended, alienating dimension.