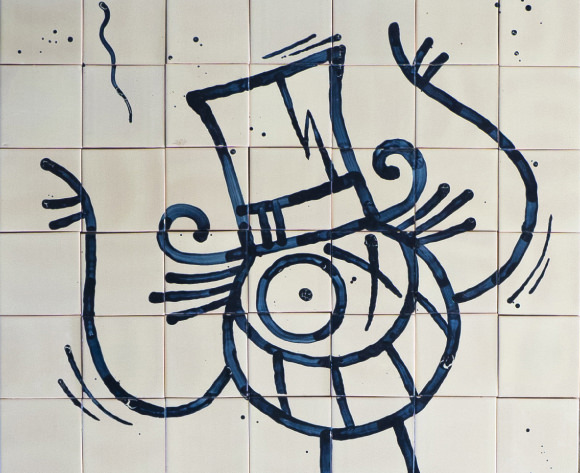 André Saraiva has long been enchanting us with his character Mr A – a friendly and somewhat cheeky alter ego that has been brought to life in the public space of countless cities, countering the drab greyness of urban life. Stylised in a string of long, elegant, simplified lines ending in a round head with a large, beaming smile that winks an eye to passers-by, Mr A has taken on a multiplicity of shapes and emotional states according to the location and to the story which the author wishes to convey.

It is precisely this poetic, passionate and offbeat interaction with the city and its inhabitants that André brings to his first solo exhibition at Underdogs Gallery – a show that is based on an ensemble of new works spread throughout the gallery and the city which, using the iconic invitation figures of classic Portuguese azulejos as a referent, blend the distinct sobriety of this technique with the energetic vivacity of the artist’s original language. This recourse to the azulejo, which André has been working with in recent years, seeks not only to explore his own cultural and identitarian roots but also to counter the ephemeral nature that has characterised the bulk of his oeuvre, mostly painted – in a swift, illegal manner – in the public space.