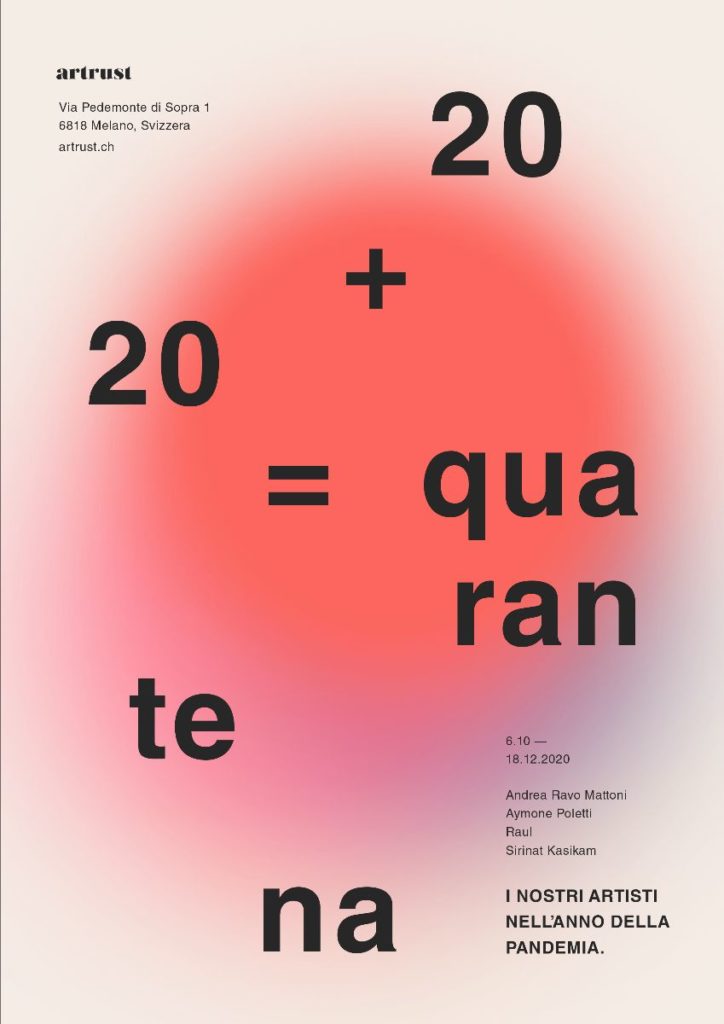 “20 + 20 = Quarantine” and “Street Stars on Stairs” the two new Artrust exhibitions from 6 October in Melano CH.

In “20 + 20 = Quarantine. Our artists in the year of the pandemic”, Andrea Ravo Mattoni, Aymone Poletti, Raul and Sirinat Kasikam will show their most recent production in Melano, with several works created in the months of the lockdown.

Artrust will reopen the doors of its exhibition spaces in via Pedemonte di Sopra 1 in Melano (CH) starting next October 6, with two new exhibitions entitled “20 + 20 = Quarantine. Our artists in the year of the pandemic “and” Street Stars on Stairs – 51 steps “.

In the first, the works of four artists who are part of the Artrust stable will be the protagonists: Andrea Ravo Mattoni, Aymone Poletti and Raul, who with the Melano gallery have exhibited in collective and personal exhibitions and attended numerous national and international fairs, with the ‘addition of Sirinat Kasikam, who in addition to being a young emerging artist has also been an integral part of the Artrust team for over four years.

The works on display were mostly made by the four artists in the months of forced confinement of the quarantine and lockdown. From the great classics revisited in spray by Ravo, to the elegant engravings by Aymone Poletti, from the instinctive signs of Raul to the meditative compositions of Sirinat Kasikam, we will be able to see in the works of these artists the signs of the sudden and forced change with which 2020 forced everyone us to do the math.

The capsule exhibition “Street Stars on Stairs – 51 steps” instead presents a selection of works by some of the most important names in the history of Street Art, concentrated in the space of 51 steps. 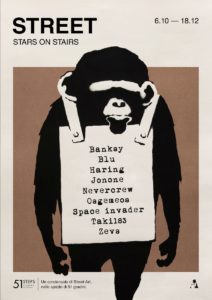 “Street Stars on Stairs – 51 steps”, on the other hand, presents a selection of works by some of the most important names in the history of Street Art, from the origins of graffiti to the present day. Banksy, Blu, Haring, Jonone, Nevercrew, Osgemeos, Space invader, Taki183, Zevs: a concentrate of the best of urban art, summarized in the ascending path of 51 steps.