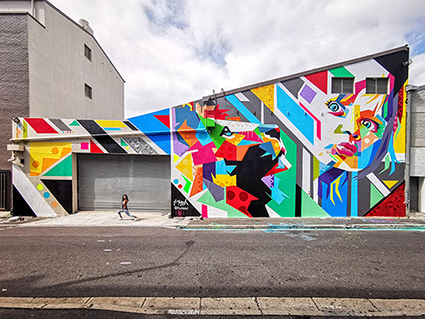 Tim Marsh has been running around on our planet since the 80’s. Ever since he was little he had an interest in extreme sports, roller-skating. In a later phase he even practiced Capoeira (Brazilian martial arts). His professional career has been a whirlwind combination of creative arts: Defining trends for clothing brands, collaborations in fashion magazines, graffiti & street art, and so on. All these activities have their influence in the art he creates today. From tribal motives to childhood memories, illustrative animals, dynamic but geometric forms and patterns… It’s all there in, a style he can now call his own.

His creations provoke a theatrical mood taking in a palette of retro-style colours which he applies with spray cans, paint and markers. The compositions he creates are made by a mixture of techniques, something he has picked up during the years. He created a certain workflow that never stops evolving, an experiment that goes on… In the end, no wall or canvas is safe, but neither are objects such as surf and skateboards.

Tim usually works from inspiration. This makes his art a little more interesting and fun, with the concept of it being ‘from the heart’ and not something that was made with the intent of exactly copying it on a wall. Working around a certain theme always works best.

Collaborations are never far from home. Spraying walls with other artists or bringing ideas to life with brands is just much more fun. Even if it’s just for a moment, you can already learn so much from just working together with that other person, or creating a concept around a certain idea.

Next up in his master plan: paint a building on a large scale. Like, gigantic large. Are you up for that? #bringthecoldbeers