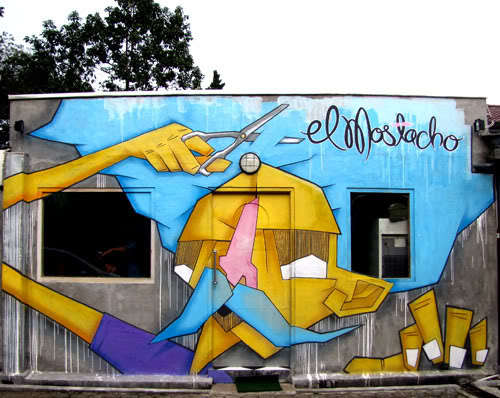 Stereoflow is a renowned street artist from Bandung, Indonesia. His interest in graffiti started in primary school influenced by the Hip-hop culture and started to paint walls in ’97. But it wasn’t until 2002, he chose to focus on street-art with graffiti crew Tagteam. Not long afterwards in 2005, he formed FAB Family. He says “For me, graffiti is a part of my process of my identity. Basically my pieces are just straight lines and simple rectangular shapes which I combine into anything I can think of. I call it choosing and limiting myself from possibilities and desires. I think art is not the image you see on a canvas or a wall, but rather, art is the process and the way you live it.” Stereflow is full of recognizable characters. One of his infamous characters he named Edor is a purple walrus. But he also draws people because as he says: “There’s always something beautiful about the people I see everyday.”