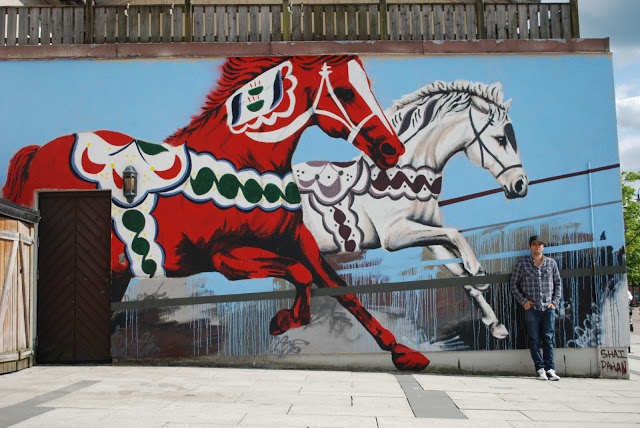 Shai Dahan is an artist based in Sweden. Having started as a graffiti writer at age 14 while he was living in Los Angeles, California, Shai has always challenged himself to find new ways of creating public art. He has evolved himself through small stencils, spraypaint, wheatpastes as well as large mural works in abandoned buildings. Today, Shai continues to find new ways to appear his work on buildings facades in hopes to compliment the vacant walls of small and large Sweden city walls.

In 2007, Dahan moved to New York City where he participated in street-art projects such as the NYSAT, Underbelly Project, and MOM&POPism. He also began to exhibit his art with galleries in Los Angeles, New York, Boston, and Philadelphia. In July 2012, Shai received recognition for his solo exhibition at the Borås Art Museum in Sweden. He was later featured as the opening keynote speaker at TEDx[1] Göteborg in October 2012. Shai was also awarded to paint a two meter United Buddy Bear[2] for the city of Borås in Sweden. A limited edition version of the United Buddy Bears were also created by Shai as part of the Borås Buddy Bear Mini Festival in December.

After moving to Sweden in 2010, Dahan began to create a new reinvention of the Swedish Dala Horse (Dalecarlian horse). Dahan began to paint the Swedish traditional Dala Horse as a realistic horse that carries the Kurbits colors and patterns of the original wooden statuettes. Shortly after creating a few illegal Dala Horse wheatpastes around neighborhoods in Sweden, Dahan’s paintings began to generate media attention. After his Dala Horses were published in the newspaper in the city of Borås (Borås Tidning[24]) as well as at Gothenburg Posten[25] publication in Gothenburg, Dahan began to get much attention for his Dala Horse painting and has been mostly recognized in Scandinavian countries for his technique of painting wild horses as the historic Dalahästs.