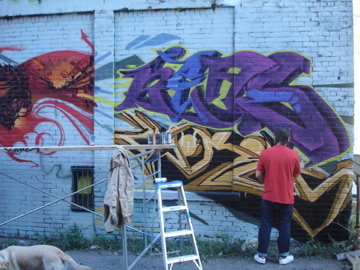 Ruined Sundays is a muralist and DJ who hail’s from the artistically rich and divers soils of Montreal. Much like his bloodline, his sound behind the decks cannot easily be pinned down. A commitment to quality and soulful selections makes his sets an evolving ode to the greatest moments in dance music history. At the center of it all is his undying love of Jamaican sound-system culture and it’s endless permutations. In orbit around this central theme is a collection of slow burning electronic uk-centric “tunes” and an ever growing list of heart wrenching vocal favorites.

As a muralist Ruined Sundays was an integral part of the proto-street art scene in Montreal. Having been raised on the Parisian influenced straight letters of Montreal’s second wave of graffiti, while fueled by a desire to discard convention; he would devote 15 years of his life to this obsession. Culminating in the formation of “KOPS CREW” a relentless city wide campaign was launched, which widely popularized new styles and tools of the trade i.e. wheat pastes, stencils, block busters, ladder spots and the ever so popular graphic design aesthetic that is so entrenched in the street art world of today.