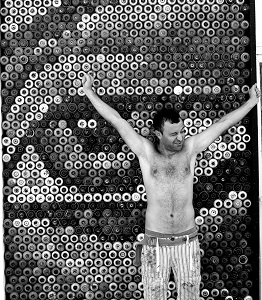 Achilleas Michaelides aka Paparazzi (b.1982)is a painter, graffiti writer, muralist and street artist based  in Cyprus. His first acquaintance with  art  began in 1992 when he attended art school in Tbilisi. From 1997 the real studies started in the streets of Thessaloniki.
It was just beginning, meeting with movement of Graffiti and hip  hop culture. Soon after Montana started to sponsor Achilleas Michaelides like young and perspective writer in 2002 he moved to Cyprus. For many years the art of graffiti, street art considered marginal and vandal. Everything changed when young people with imagination, talent, social concerns and point of view began to give a new impulse. Started design and shape empty and meaningless elements of the city: walls, pegs, abandoned and inaccessible parts of the city were the canvas for expression of a newgeneration who claims through the voice of expression and creation. Only in the last few years this type of art became recognized by museums and galleries all over the world. Perhaps the most important (most recognized) exponent of this art in Cyprus, Achilleas  Michaelides.  The Paparazzi considered an accomplished artist fascinated by socially subversive experimenting. He offer us another truth by trying to bridge the street art with the arts (ie. street art with fine arts) through a constant search and experimentation in the field, synthesis of styles, through his own unique approach, integration of imagination and searches. This gives it a different meaning and aesthetics, the general  progress of dialectic.  It is no exaggeration to say that he was a pioneer in Cyprus, in the creation of this new expression ”murals ” (until then there were only fans and insulting slogans on the walls) and was primary instrument in the evolution of this art, helping and participating in dozens of events, organizing and curating Ayia Napa Street Art Festival. Till now (2015) he had 5 personal and 23 group exhibitions. Paparazzi is one of the few artists in Cyprus that has embraced the art of graffiti and street art. He has contributed a great deal to spreading this urban style of painting on the island. The style of this controversial artist has always kept a rapidly developing course.