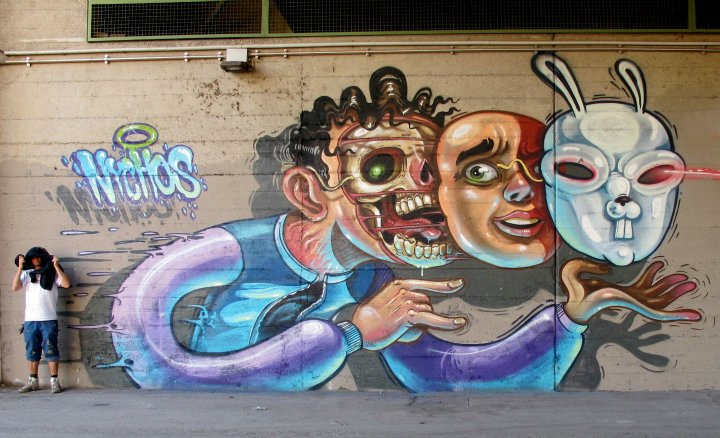 Nychos is a street artist from Austria who creates spectacular, detailed artworks. Nychos grew up in a little village near Graz (Styria, South of Austria). He calls it the green hell. Born into an Austrian hunter’s family, he saw, at a very young age, things which normal people would consider as cruel and brutal.
His childhood experiences strongly influenced him in combination with his artistic curiosity to establish his style in creating animal and human figures, dismembered and anatomically shown. He also established the movement REM – Rabbit Eye Movement- . It nourishes the idea notion of creative destruction and the breakdown of society. “The rabbits operate outside of our system,” says Nychos, “and have no rules to follow. He often collaborates with the world’s most accomplished painters, making him one of the most noticeable breakout artists from the Austrian scene. In 2011 he teamed up with several “Urban Illustrators” who all have a kind of unique and weird style. Dxtr, HrvB,Cone ,Vidam ,Look,Frau Isa,Rookie,The LowBrows and Nychos are “THE WEIRD”