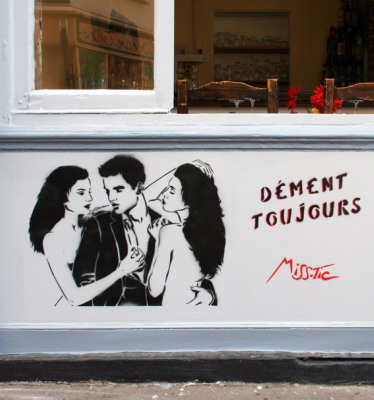 Miss.Tic is a Poet a visual artist and an unavoidable street artist. Miss.Tic develops a pictorial and poetic universe it prints stenciled on the walls of Paris since 1985. With designs that  feature women and incisive sentences, his creations express freedom. Her art is based on a subtle mix of lightness and gravity, reckless and provocation.

Regularly exhibited since 1986 in France and abroad, claimed by the world of fashion (Kenzo, Louis Vuitton …) and approached by the film world (in 2007 she designed the poster for The Girl Cut in half, Claude Chabrol) Miss.Tic also participated in the 2010 edition of the Petit Larousse illustrating the words of the French language.

Represented in international art fairs, some of his works were acquired by the Victoria and Albert Museum, London, and the Contemporary Art Fund of the City of Paris.