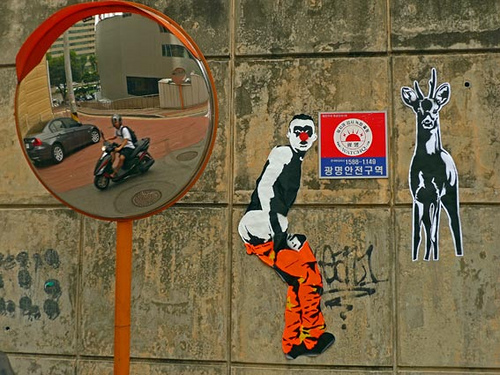 MIMI the Clown, French artist born in 1974, invented the modern graffiti proclaimed “king of graffiti” by the Minister of Culture Himself whom he met at a festival in 2010. Committed artist and provocateur he has repeatedly denounced the hypocrisy of those who govern us, the ‘tristitude’ room and a society of consumerism in which the human being finds himself a slave aware of his situation but trapped. Like all the other clowns he draws his energy from the younger generation. His influences pass through the rock n roll and circus arts. His incisive stencils mixing humor and politics are now known worldwide, and even beyond, with many exhibitions and auctions dedicated to urban art.