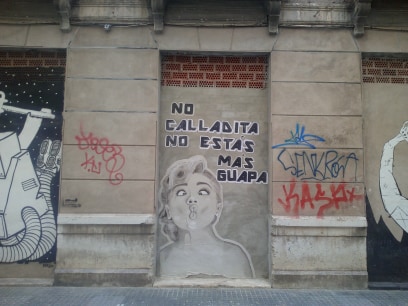 Laura S.Rodríguez was born in Malaga (southerm Spain) in 1988. When she was 9 she moved to Pamplona (northerm Spain) after her parents divorce, however she never lost the contact with her Andalusian roots. Years went by moving between north and south, the beach and the mountains, the sun and the snow. Perhaps this was the origin of her fascination with traveling, art and culture.

After finishing her studies at the School of Arts and Trade of Pamplona, she studied at Corella’s Upper School of Arts and Desing. Before leaving Pamplona, where she held some of her first exhibitions, she worked as a volunteer teaching arts to children and tenagers from disadvantaged and social excluded families. This experience made her develop a deep awareness of social issues.

She came back to Malaga to study Social Works at the University while she also participated in some artistic ventures in the city. After finishing her studies in Belgium and Ireland, she colaborated in the foundation of La Casa Invisible Cultural and Social centre in 2007, where she has regularly held some exhibitions since then.

Although she started by using figurative drawing techniques, such as pencils and acrylics, her work went through periods such as abstract expresionism, the experimentation with fluid painting, figurative expresionism and the use of recycled materials. Her last works however are related to urban art. In these large works she uses spray, paper, acrylics, textile and collage as a medium for a very straightforward message, in which she analyze the society we live in, aiming to linger in the audience mind, inviting them to reflect and develop critical thinking.

She creates with other artists the art collective “Guadalfen” with who she participated in several artistic interventions in public spaces from 2009 to 2011. The goal of most of them were the appropriation of public spaces in order to bring closer the local art to citizens.

Among her artistic influences we can stand out The Guerrilla Girls, Kathe Kollwitz , Coco Fusco or Joan-Josep Tharrats, as well as countless urban artist as Kashink, Blue, Logan Hicks o Swoon.

A photograph of one of her works, which was being exhibited in a cultural center in Malaga, was published in the official magazine of the Reina Sofía National Museum (Carta number 2) in 2011.

Recently she has sporadically colaborated with the colective “ Malaga más Bella” in some urban artistic interventions based on improving some city’s areas by painting them in collaboration with local people.

Presently , she lives and works in Malaga as an craftwoman and artist, she has travelled more than 20 countries admiring its walls, she takes part in a feminist radio show and fight against inequality and for social justice.