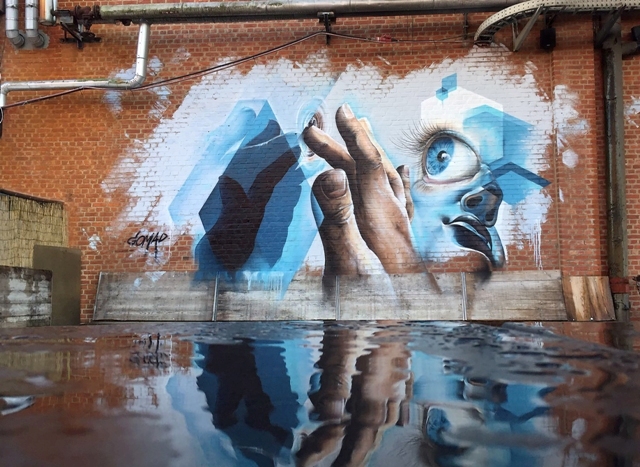 GOMAD (Marcus Debie) was born in the city of Sittard, The Netherlands, in 1972 and still lives and works there. For more than 30 years now, GOMAD has been painting around the globe, participating in uncountable projects. A long history of murals, street art, graffiti and paintings on canvas could almost crown him as Aerosol King of the Lowlands, but he still prefers to remain as humble as ever.

Starting out as a graphic designer in his younger years, he quickly shifted to art director and worked at a handful of signing and advertising companies. This allowed him to create a base for the artwork he creates today. His photorealistic style is often combined with abstract graphical shapes and colorful planes. Unlike most artists he is never too shy to practice his profession in any style or genre, but whenever he gets the chance he will create his own personal work that often consists of intense eyes, hands and faces in a very surrealistic and mind-bending set up. This ‘GOMAD’ style is combined with cubistic shapes in some sort of a Picasso-like composition, better known as ‘post-neo-cubism’.

In the most recent years, GOMAD besides doing murals has also been painting canvasses in his personal and unique style, creating a stronger position for himself in the art world. They show the world that he isn’t only skilled in what he does, but can also create stunning results with his experience. Since 2012 his works are to be found in street art and contemporary art galleries throughout Europe, the US and beyond.

Facts and figures
– Started in 1985
– Art work abroad: Belgium, Germany, France, United Kingdom, Greece, Sweden, Spain, United States, Australia and more to come…
– Three other artist from his small but creative city of Sittard are Mr. June, Does and Nash