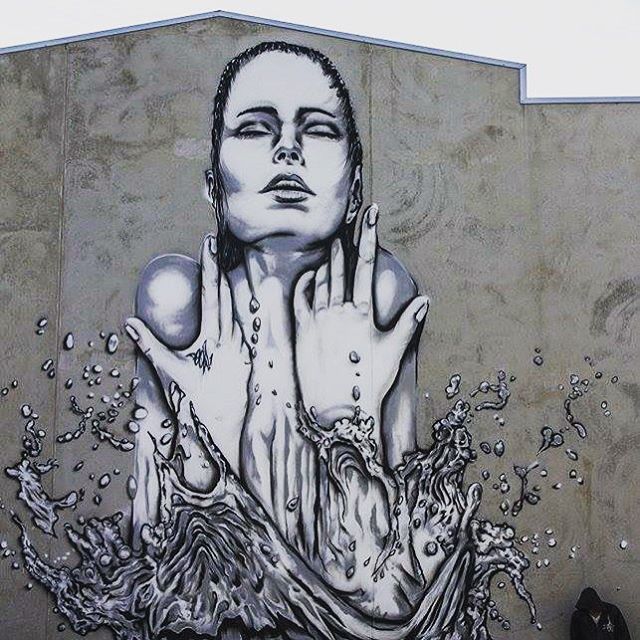 Deow is a street artist from New Zealand. Born in the southernmost city of the world in the mid 1980’s, like most artists, he exhibited a passion for drawing and scribbling from infancy. Nurtured by an artistic family, and fired with a fierce competitive spirit, he still recalls that his yearning to excel pitted him in torrid combatative brawls with pens and pencils against his equally driven cousins. Currently headline artist at: “SPECTRUM” – Street Art Festival Christchurch New Zealand

Adolescence was as troubled as anyone’s but he found a new sense of balance in a fate that took him to Anaheim, California. There, a vista of highway walls stretched in endless ribbons of graffiti across the landscape. Tenement blocks were carpet bombed with the unfettered outpourings of an unruly Californian Youth – soul and heartbeat and angst floated free as the air across the Californian landscape – a signature – a vibrant reminder that artistic expression is not content to subsist, diffidently within the breast but must sport and display itself before the eyes of the world.

As a child to its mother’s milk, Deow suckled on the artistic licence of the new land. As his passions inflamed, huge gaps appeared in local spray can stocks. Armed with little more than his expressive urge and an OLD ENGLISH calligraphy font, He brought an antipodean idiom to the Los Angeles streets. His mark lingers there still – in places possible and impossible to reach.

Deow returned to New Zealand possessed by a demonic urge to smother gray, lifeless, urban walls with hues and colours and the stuff of life. As the Californians pondered the mystery of his lingering idioms in Los Angeles, Deow splashed his mark across the dusty old walls of Southland and Otago. He layered the grime of centuries with the sparkle of new life and now apologises for any coronaries that the makeover caused the more conservative beneficiaries of his noble and gratuitous art.

From then to now is but a whisper of breath – the heady anarchic days of youth are now tempered by the years; the outpourings mellowed by the experience and joy of life. Expression has taken on a new life, legitimacy and a new currency of meaning. His graffiti and street Art has found its way into the mainstream. Launched with a solo exhibition billed as Art of Fact, Deow has rehabilitated the raw rebellion of the streets into legitimate expression of soul and heart. So whilst he has the respectability of exhibiting with Southland’s best artists in the Annual Spring Exhibition, Also winning the 2015 Peoples choice award at The Edge of The World exhibition for one of his spray painted native birds.

After spending the last 9 years running an Alternative education Art program with troubled youth from his home town, When not teaching or doing commissions or working collaboratively, Deow fills his days with custom painting surf boards, design work, street style art and canvas work. The rest of his days, and many of his nights, he will indulge his other passion – surfing. For Deow, the sea is yet another canvas on which to express himself. He etches his way down the smooth faces and splashes and swirls through the spume, creating patterns and forms to tantalise with a mere whisper of existence. Who knows, perhaps these images filter through to the sub conscious mind and emerge, unbidden, into the oils and the brush stroke/ spray cans . Perhaps, when we see Deow riding the waves along the Southern Coastline we are watching the birth of another artwork. Can you see the essence of the South Coast in these works. Look harder, it will be there somewhere..