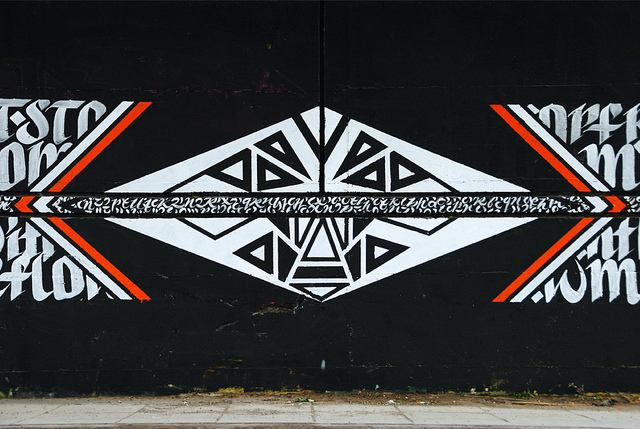 Blaqk team consists of Greg Papagrigoriou and Chris Tzaferos (Simek).Both are Graphic Designers who live and work in Athens.Blaqk team is a combination of graphic elements, that characterizes the work of both – geometric forms, geometric patterns and calligraphy-typography (often used as an abstract decorative elements in their compositions). They adjust their creations outside based on the location they have chosen. Blaqk are really interested in finding special places-abandoned places with natural textures. They used deferent types of materials.
They both decide the artwork they make.
Blaqk have a common design method of work.
What they do is sometimes strictly geometric and sometimes more abstract.
They love to experiment a lot and try new design methods.
Blaqk created in March 2011.

SIMEK (Chris Tzaferos) Graphic designer & artist. Born in 1985 in Greece. Has been experimenting with graffiti & street art since the beginning of 2000. Studied Graphic Design at the School of Graphic Design in Athens. Took up painting and photography in 2009 while working as a freelance graphic designer. SIMEK’s creativity stems from modern & traditional architecture. His work has been shown in numerous exhibitions not only in Greece, but also in Larnaca (Cyprus), Munich (Germany) & Brussels (Belgium).