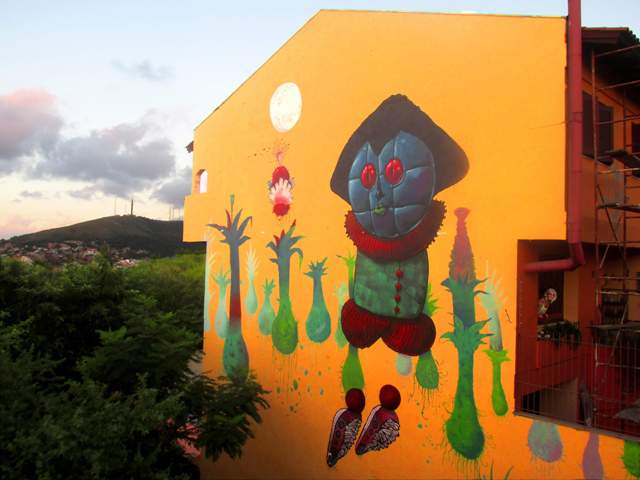 Amaro Abreu, is based in Porto Alegre, RS, Brazil. He studied Visual Arts at Ulbra. He operates in urban art since 2006, painting and participating in events in cities in Brazil and contries in Argentina, Uruguay, Paraguay, Mexico, France and Germany. He’s made individual exhibitions: Habitat, in Porto Alegre, Canoas, Bage, New Silver and Santa Maria and Parallel Life in the gallery Mario Quintana. Integrated also in group exhibitions: “I do Part” (Brazil), plug Art Melo (Uruguay) and Somos Todos (Mexico). He acted in short films CineMarighella and Graficleta, produced by students of chair of Photography for Film and Video Ulbra; participated in building 11 programs (which was made the setting). Graphite conducts workshop for children four years ago in Project More Education. His work has been published in Labour Stories book, produced by the Municipality of Porto Alegre; Bastion in the magazine, made by students of the UFRGS; and in the newspapers Jornal do Comércio, Zero Hora, Correio do Povo and Boca de Rua. Participated in the “Light Effort in Prison” project that was painted the inner courtyard of the central prison and curator at the Multicultural Project Canoes, wall painted by various artists in the city of Canoas.