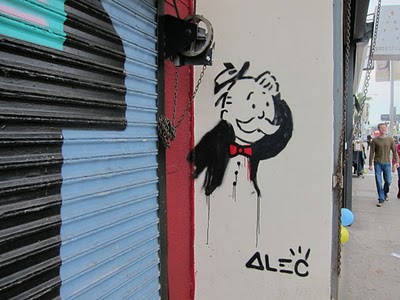 Alec Monopoly is the unidentified street artist speaking through the iconic board game character of the Monopoly man. He is based in Los Angeles but originaly from the east coast. Alec’s art connects the medium with the message on lampposts, billboards, and galleries throughout the world. Initially his work was fueled by concepts of wealth, excess, and the ingredients of an economic collapse, his art has since evolved to explore ideas of society and selfhood at large.
As a painter and a street artist, Alec creates work that engages and exposes the intensities of modern life. Interacting directly with the shifting concepts of power and property, his work is often created under the realities of surveillance and secrecy. While his gallery exhibitions are often sold out, Alec’s street art is found throughout major urban landscapes allowing his work to remain accessible to a diverse audience.