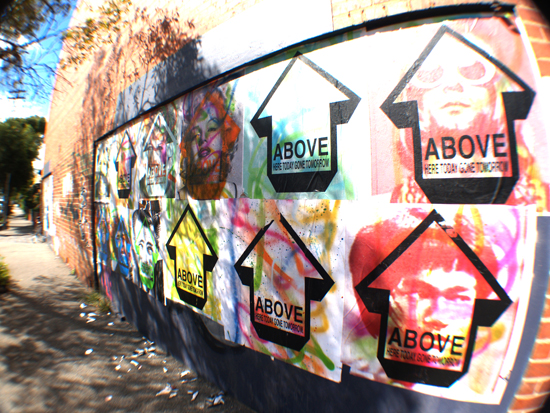 Above is an international street artist who chooses to deliberately keep his identity concealed. Above is known for his multitude of different mediums he paints. He is best known for his multiple layer and full color social and political stencils, spinning wooden ‘arrow mobile’ installations, and large witty word play text based mural paintings. Above started traditional graffiti by tagging freight trains in California in 1995. At the age of 19, Above moved to Paris, France where he started painting his trademark arrow icon pointing ‘above. Since 2001 Above has self financed annual tours around the world, with each tour exploring a new part of the world and often a new medium or style of artwork. During the past 13 years Above has been successful in painting artworks in the streets of 90+ cities in 60+ different countries around the world.