Vermibus – The art of hijacking publicity

Vermibus is a Berlin based spanish artivist! He collects advertising posters, transform them and reintroduces them in the public space. Artist and Activist, Vermibus hijacks publicity and transform the artificial beauty created by advertisers into ghosts..

ISSA – Hi, What would you like to drink? Coffee, Tea, Beer, Soda or something else?


(Vermibus) – Coffee to wake me up, tea to help me sleep.

– Can you introduce yourself?

I am Vermibus a Spanish artist and activist, focused on questioning public space and the beauty imposed by the advertising imaginary.


It is said that the spanish word “Cadaver” (corpse) comes from ” CAro DAta VERmibus” meaning ” meat given to the worms.” I Choose “Vermibus” as pseudonym, because I think that advertising models , after all the transformation process to which they are subjected , from makeup , lights , photo retouching , etc , are no longer individuals and become bait, as their identity is replaced by the brand.

I am an Artist and an Activist. 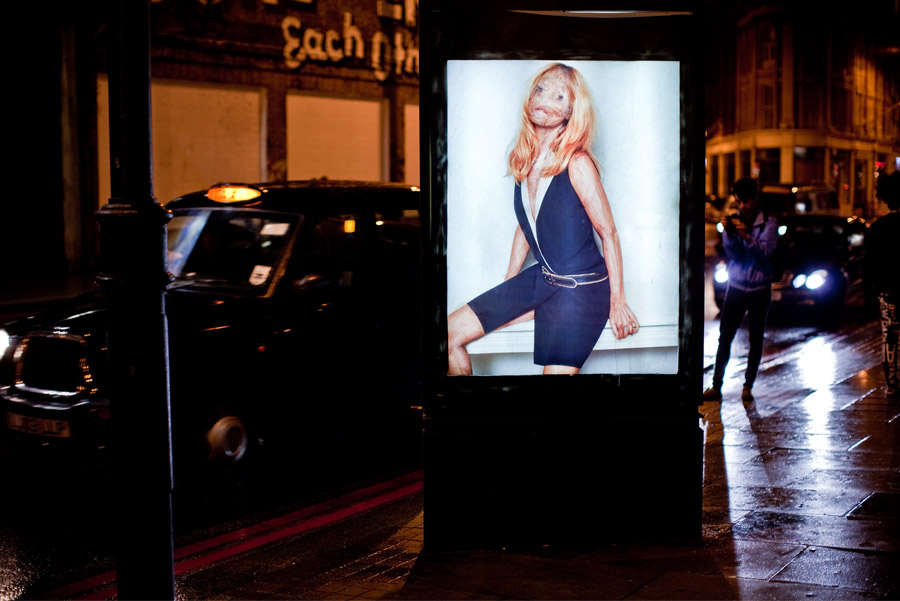 I started painting graffiti at 10 in Mallorca, leaving me with the sensations and adrenaline. In Madrid is where I started to wonder what I was doing , but it was not until I moved to Berlin when I began to understand how I could use public space in a social way.

I have trouble going to sleep, and to wake up in the morning.

Street Art is so indistinct and so full of different styles that any song could fit. But I’ll choose “I don’t want to set the world on fire” from  The ink Spots.

I think the inspiration is overrated , in my point of view the flow between different states is much more important . There are moments of great inspiration in which you are not in tune with yourself or you do not have the technique, or enough material, or you’re so focused of other things that everything fails . There is a point in the flow to be reached , that moment when inspiration , technique and concentration are aligned. Inspiration without technique, material or concentration is not worth anything, and vice versa. 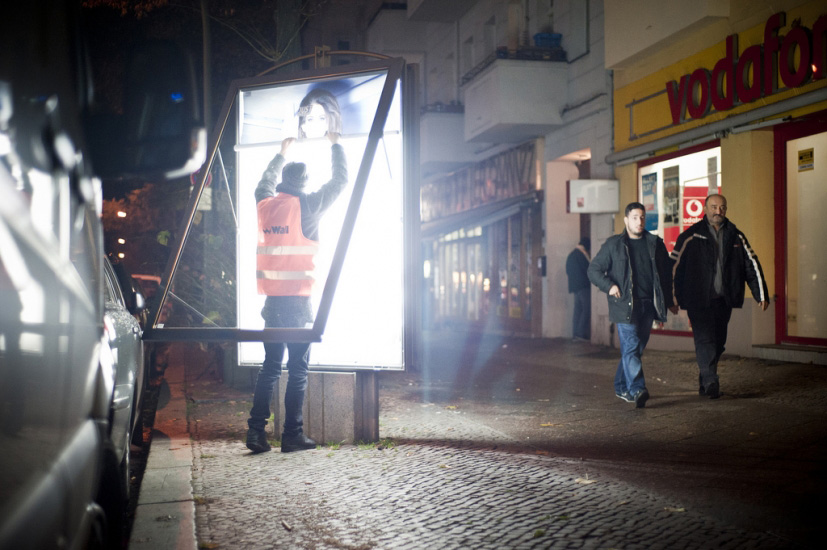 I have everything I need in my studio , I need nothing but the desire to work .

-Name 3 other artists you admire and why?

Artemisia Gentileschi for having so much courage to follow her dreams and stand up to patriarchy in such a difficult time for women and consequently be one of the first feminist artists .

Francisco de Goya , as the first war reporter , to move from serving royalty and church to criticize them, like no one did.

Lucien Freud, for the conceptual and emotional burden on each of his work, for having managed to portray the model beyond physical beauty.

I lack many cities to visit to answer this question . Today I would say that the internet is the capital of Street Art , but I guess that does not count. 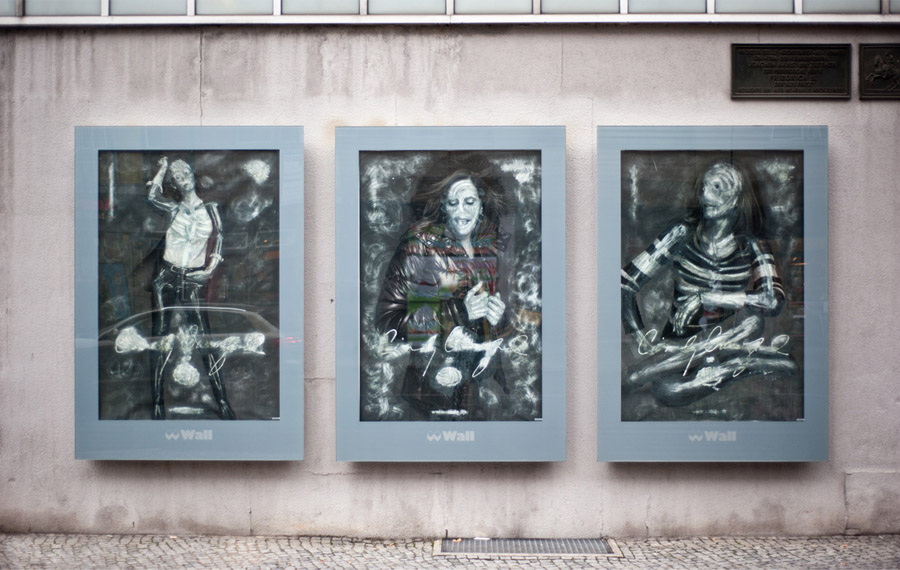 Almost everything I like is integrated in one way or another in my work . Such as design, photography, music, video …

– Which is your dream project – ignore costs, realistic thinking and all means.

Remove advertising in the media , so they can truly impartial.

From the beginning I included many hidden messages and a lot of symbolism in each artwork, a bit following what advertising does. Now all the symbolism and message is in the concept rather than on the work itself and is no longer hidden.

I Work on a medium which did not enter in conflict with street artists nor graffiti writers , so far I didn’t had such problems . 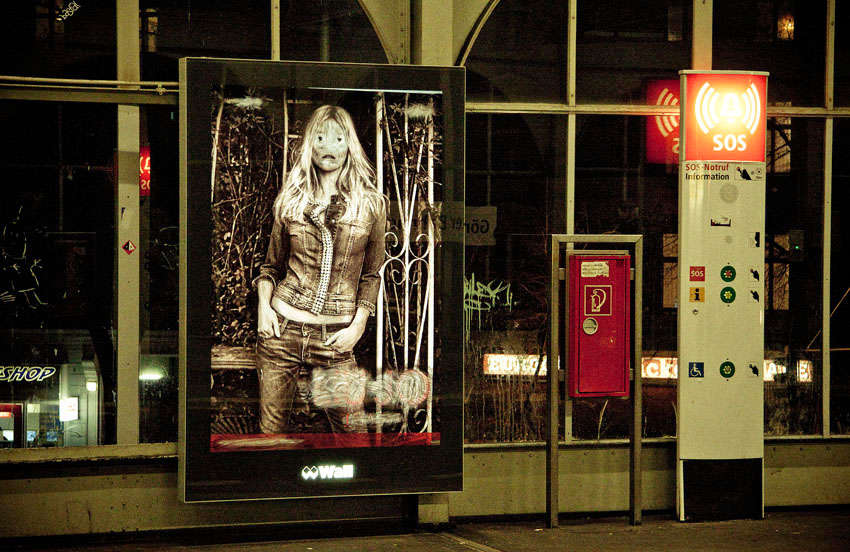 I do not share that view at all . I think street art as a collective or as a community, must be open to other artistic (or not artistic) movements, more important ones, with more influence or impact. About how I see the future, I think street art as a term, will die in the coming years. I explain myself: Personally I think it’s time to differentiate what is Street Art and what’s next . Now many artists start talking about contemporary muralism, adbusting , public art … trying to raise awareness of the need to break with the idea that street art is everything. I think it’s obvious that you can not define such a broad movement , with so many variants with such a vague label.

World leader ? no thanks

-Do you have a message you would like to express to the world or a certain community?

I have two lines of work that go great together.

With one, I try to criticize a model of beauty imposed by the world of fashion and advertising and with the other I want to denounce and create a reflection about how the public space is occupied by advertising, leaving blank advertising space without adding anything . The evolution of the second line went from the NO-AD Project to the NO–AD Day , an annual project of free participation . Last year we were 60 people in more than 20 cities around the world , I hope that this year many more participate . All the info about NO-AD Day is here: www.noadday.org

Find out more about Vermibus here.

FPLO – The Colour Creator →
← Alessio B – Spreading The Love