Back in town for a 5th summer! Festival Inspire, which annually invites local and international artists to paint giant murals in the Greater Moncton area (NB, Canada), returns for a 5th edition next week from July 8th to 13th.

More artists will be invited to paint murals for one of the most popular festivals in town. The favorite free public events like the Color Party and the Disco Bike Ride will of course, be back again. Due to the success of the first edition, Art in the Dark is back too on the Friday night, and the festival will activate 3 new spaces along Moncton’s Downtown Riverfront Trail.

With more than 40 giant murals throughout Moncton’s downtown core, Dieppe, and Riverview, the Inspire Festival has made a name for itself over the past four years. Through all the program transformations, the murals remain a keystone of the festival by both local and international artists.

Lisa Griffin, Director of the organization explains the idea leading this new edition “This year we’ve decided to celebrate how we tell the story of who we are as east coast Canadians, residents, artists, and visitors, through celebrating the magical and powerful Petitcodiac River. With the river as our guide, we’re connecting the history of the people, the place, and the arts throughout the majority of the programming and in our event curation. All the artists involved deserve a high-five and a thank you for making our city richer again this year. and for their help in bringing the whole east coast (and a few special overseas guests of course) here to celebrate this keystone anniversary.’’ 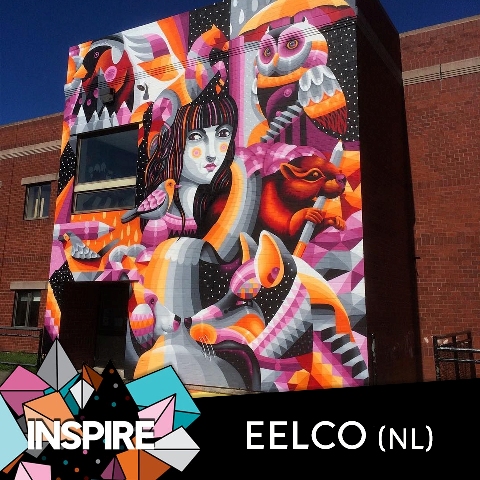 Eelco, one of Moncton’s favorites, helped introduce Monctonians to contemporary muralism through his work on both the Edith Cavell and The Castle Manor, designed the new graphic identity of the festival this year. He will paint several pieces that will be installed on the rooftop patio of Canvas, Moncton’s new future hotspot at 55 Queen Street.

Oak Oak is visiting from France to interact with the existing city scape using his world famous graphic urban interventions. KiriLeigh from Denver, Colorado will create a gigantic Mandala on the back of Queen Elizabeth School facing the school’s playground and Moncton’s english hospital. Tire Shack Brewing Co., opening later this year on John Street will host a poetic piece by Sens, flying in from sunny Mexico. The colourful and vivid french artist Taroe will help to transform the newly pedestrianized Zone Connexion in Dieppe. Beehive Design Collective from Maine, Hil Le Frank, Lysanne Lombard, Midas Well Creation, Chelsea MacCormack , Kristen Crewe, Melissa Legresley, Tanya Doucet and Nicole Vautour will create pieces, live along the Riverfront Trail. A few of these pieces will be available for auction to local businesses who wish to host them on public walls of their buildings for a year.

Sputnik, Moncton’s only geodesic dome bar, will land at Riverfront Park to host a full week of programming including talks, a French karaoke night, workshops, an electronic music stage, and tons of live East Coast talent like: FM Berlin, Papa Ya and Bleum.

Throughout the 6 day event everything is free except the bar that will offer local drinks with the best terrace and the best view on the river in town.

Flagship events are still on the agenda. The Colour Party brings together hundreds of people each year to create a giant living human canvas. The Disco Bike Ride, the brainchild of Mayor Dawn Arnold, organized in collaboration with the Cooperative la Bikery will be back as well on Friday July 12th with the help of new director Simon Dubé. Hundreds of cyclists will ride through the city streets fuelled by Disco, flashing lights, and costumes discovering the new murals as well as all the pop-up performances and installations from Art in the Dark, this year curated by Toronto artist Thom Sokoloski.

Several free guided tours of the murals have been planned for the week to give the public the inside scoop on the stories behind the walls. The Saturday as usual hosts a full day closing celebration of the increase of colour and culture.This year, three new spots will open on the main riverfront site. The Graystone stage will open from Thursday to Saturday with local craft beers and several headliners: Garrett Mason, Dylan Menzie, Owen Steel, Kalyna Rakel, Gabrielle Papillon, Joyful Noise and The Brood. A Silent Disco Party will take place after the disco bike ride to keep the disco vibe alive.

A pop-up stage will showcase the best hip hop artists from the Maritimes on both the Friday night and Saturday afternoon in front of the Trash Turtle mural by Borallo II.

The Art Tent will host The University of Inspire; the festival’s workshops and live art hub from Thursday to Saturday this year.

“What we do means a lot to us; it’s ‘the why’ we work all year long behind the scenes to make it happen. We hope this festival means as much to the city, or more, than it did when we began 5 years ago; says Festival Director, Lisa Griffin.

For the past two years Inspire has put a lot of effort into being an eco-friendly, waste-conscious event. The organizers rely heavily on upcycling donated materials as much as possible to create their sets and facilities, the spray cans chosen are the least harmful possible for the planet and the empty cans are turned into infrastructure like furniture or lighting installations. This year the public will keep being invited to bring their own clothes to be transformed into Inspire merch to avoid supporting the conventional textile industries that are detrimental to both people and the environment. For the month of July this year the festival will continue to promote their campaign ‘Plastic Free July Moncton’ to invite anyone and everyone to join in the challenge of living for one month without single-use disposable plastics, partnering specifically this year with businesses around town who are also making a tangible effort to be part of the earth-friendly movement.

Party starts this Monday for 6 days!
The full programming is available online on www.festivalinspire.com