Art, revitalization and involvement are the objectives of smART Street Colors, the initiative promoted by the cultural association “El Redefoss” that sees OZMO, ZED1 and RANCY at work. Faithful to their poetic and language, the three Artists worked on the grey and massive wall coasting via Gallarate, the artery that absorbs the 40% of the urban traffic on the way to Milan. By the colors of blue placed in the background, inspiring and conversing with the context. The three works recounts us about the streets and movement by their meanings of the route, exploration, progress, connection, dynamicity and choice, offer themselves like visual and esthetic experience that open the imagination and to the reflection.

Known all over the world for his works that treats deep and current topics fell in a surreal and dreamlike atmosphere, in a fairy world animated by puppets and fantastic creatures, ZED1 realized the murales “Il Bivio”(the Crossroad). By the left side of the composition, a character holds in his hands the PlayStation joypad, by his foot there is a balloon and near the face habits and vices appearing in form of a poisoned mushroom. It’s wrapped between the streets that arrives to her beloved one, to her that, beyond the crocodiles, appears to his eyes as a Muse, sat on a tree, into the pureness of the Ideal. With her or not with her? Lonely or couple? This is his dilemma that keeps him pending, the crossroads that the artist evokes. The signal arrows painted by the center of the pictorial space shows the two possibilities like opposite directions. The cantilever roof of the Line 35 and 528 and the people that leave, arrive and wait, so much integrated into the work on a conceptual and formal level to become an essential part, suggests us that this is a crossroads that everyone may encounter by the way conducing to oneself to another. 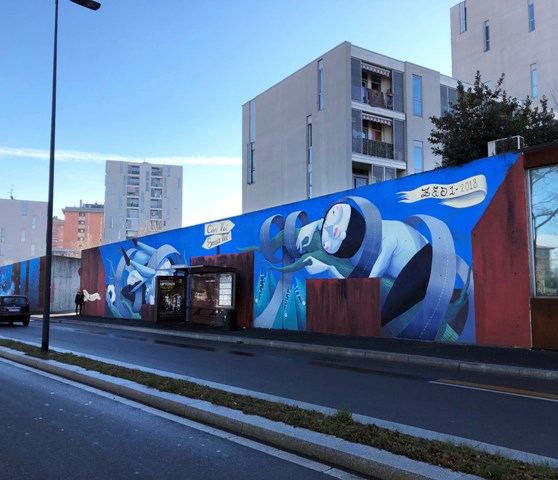 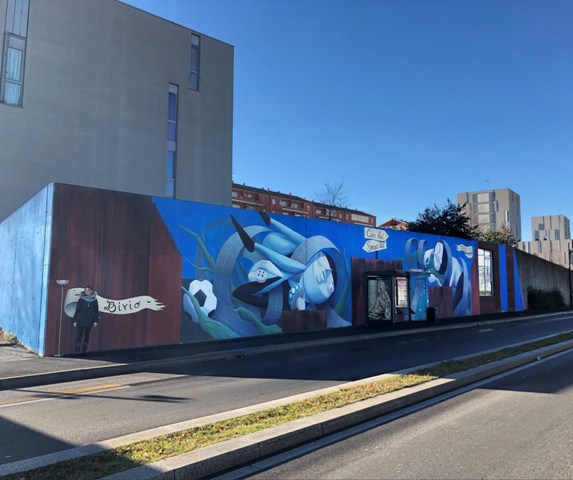 OZMO recontextualizes a reproduction of the “Venere de’ Medici” and “Hermes and the Infant Dionysus” by Prassitele. The two sculptures are represented stretched like floating into the blue, opposing and polarized as principle female and male. On one side the goddess of beauty, in her demure version, appears shining and serene in a game of lights and shadows, by the other side Hermes, the god of the transgression of the borders and the patron of travelers, is caught while moving, in an affectionate and daily attitude.

‘Venere, Hermes e Dioniso bambino’ inspired by the context and installed near Via Gallarate, expresses the wish that OZMO addresses to the many pendular that every day take the big artery to be able to always travel under the auspice and protection of both the divinity. Realized by the artist appealing to a real ars combinatoria and playing on the ambivalence inherent into the compositional choice and in every figurative subjects, it not only catches the eye, but it opens the minds to different levels of reading and interpretation. 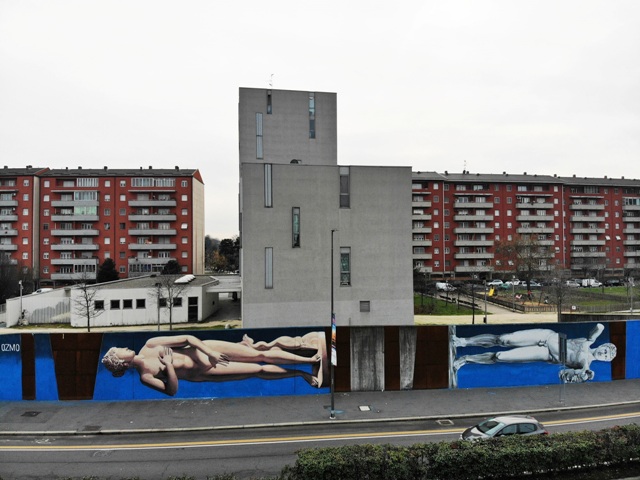 RANCY, that is also the curator of the initiative, created the murales “Volere è Potere”(Wanting is Power).
Depicted among figurative elements that refers to a urban center and stratification of the instruments and mankind’s inventions, an astronaut, painted in a Pop and Vintage key, rules the composition. Throughout his mind leaks out, expanding alongside the arm and arriving to the hand, the natural vibration will that the artists represents as a sort of luminescent electric discharge.
If the centrality assigned to the astronaut and to his energy makes the work an invitation to the exploration and determination by reaching always new horizons, the emphasis given to the interaction between mind and hands, reminding us that it is precisely this dialogue that brought us from the caves to the space probes, makes it as an hymn to the progress in the name of the Research, of the Experimentation and of the Technology.

All of this with a special eye to the majestic and holiness of Nature, reaffirmed by the two enormous trees painted by the left side of the murales.

A collective exhibition staged by the spaces of SMART EQ (Via Daimler, 1), on the occasion of the inauguration of the three murales, allowed the visitors to know and admire the indoor productions by OZMO, ZED1 and RANCY.

Sponsored by the Milan’s Town Hall and Milan’s 8th Town Hall, the project