Last June Urban Forms Foundation from Łódź, Poland had a chance to host Guido van Helten for a very exciting, big project.The Foundation and the artist have already had two projects together – in Poznań and Grudziądz,but this time it was finally possible in Łódź – the place with over 100 murals around the city.

The project was unusual because the walls for Guido van Helten already had murals on them.  The “twin” piece by polish artists Cekas, Chazme, Proembrion, Sepe and the late Tone has been destroyed by a poor weather conditions. As the response to the questions about the renovation of the murals from the inhabitants of the buildings, Urban Forms decided to invite an artist, who works closely with the local society. After weeks of preparations, Łódź was ready for Guido van Helten, where he spent almost two months working on the new surface for the two tower blocks. 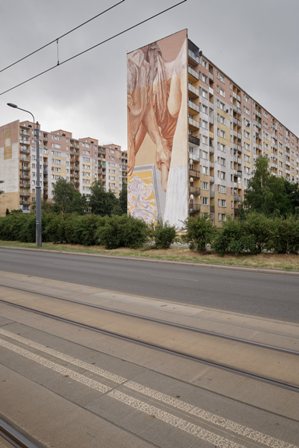 The second face of murals was inspired by the idea of a discussion about art in public and private spaces. In order to get to know the artistic tastes of the inhabitants of the area, together with the artist, Urban Forms organized a family picnic. The meeting was aimed at engaging the community members in conversations about their favorite works of art, presenting artifacts and creating a nice and friendly atmosphere within the neighbourhood. Photos taken during the picnic helped to create the final project for the walls.

Artist also visited Łódź residents at their homes, asking to show their favourite pieces of art and getting to know a few beautiful stories behind them. During the creation process, Guido decided to involve the youngest generation in the project. One of the pictures made by a little boy Tymek, titled “Łeba”, ended up on the wall.

The new walls in Zarzew district of Łódź have brightened up the weary neighbourhood. Characteristic for Guido van Helten’s works silhouettes of people painted in building’s given colors are complemented by the real works of art – taken from the homes of Zarzew inhabitants. 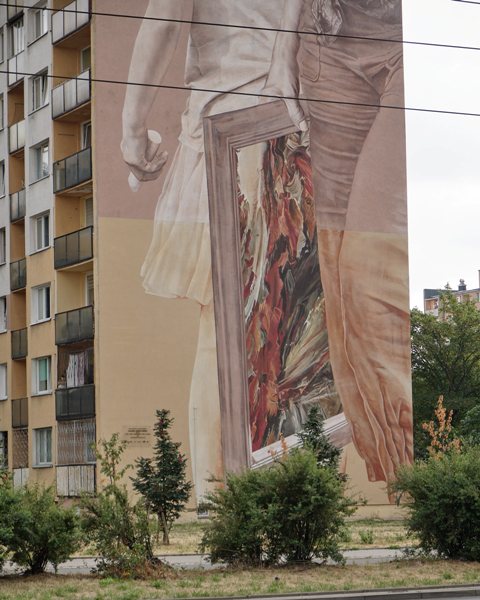