In case you didn`t notice there is a Fish Invasion in our streets! The artist behind is Fishes Invasion and he talks to us about the Invasion! The main influences are Propaganda, graffiti and Japanese culture.-What you choose to drink? Coffee, Tea, Beer, Soda or something else?
– Milk, only milk!

-Introduce yourself
-I’m MERIO, from Italy, I’m a total stickers addict, I can’t go out without something to stick. 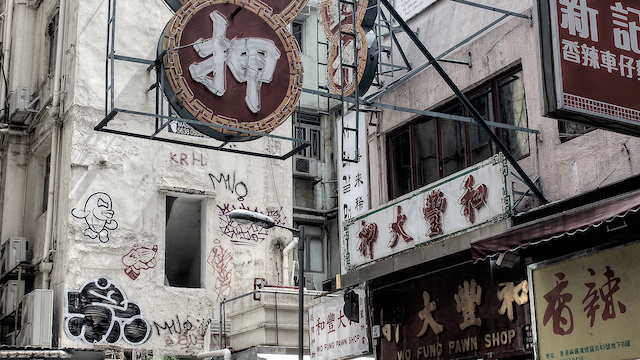 – How did it all start for you, and what is it nowadays?
My background is in the graffiti world. I started spray-painting walls for the first time when I was 13. You know, those horrible things that you can do when you start using a spray can for the first time. I kept painting for a couple years before taking a break, although I never stopped drawing. In the meanwhile, I started getting interested in graphic design and I attended University, such a big experience for me. During that period of time, I went to NYC, a place I’m really emotionally connected to and that’s where everything started. I was home one day, I took a pencil and a piece of paper and I started drawing, without any specific reason. What came out of it was an angry fish. It was love at first sight. I vectorized it, printed the first (terrible) stickers with a home-printer and went out to slap them. I literally wanted to sticker-bomb the whole place! Everybody had to spot that fish! The truth was nobody actually cared. Anyways, a lot has changed since then, we’re still together and I feel like there’s still much we can do together… 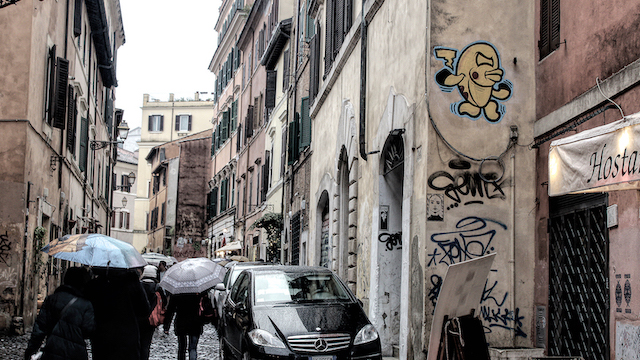 Eating corn flakes with milk. I just can’t do without them. It’s like Popeye with his daily dose of spinach, I think It’s the exact same thing. It’s the only way I can go out sticker-slapping, painting or just sitting in front of my computer and create something new.

I don’t have a favorite music genre, I listen to almost everything. It depends on my mood, I can listen to rap and after two songs switch to Italian music from the 70s… I’m a bit odd on that front but one thing for sure is that I just can’t work without music.

Everything that surrounds us is a source of inspiration. I like to look around and help my brain generate new ideas that might work with what I want to do. Travelling and visiting different places give me a lot of inspiration. Every time I return home from a trip, I always have new ideas and I’m always eager to try something new. But as I said, inspiration can come from anywhere. 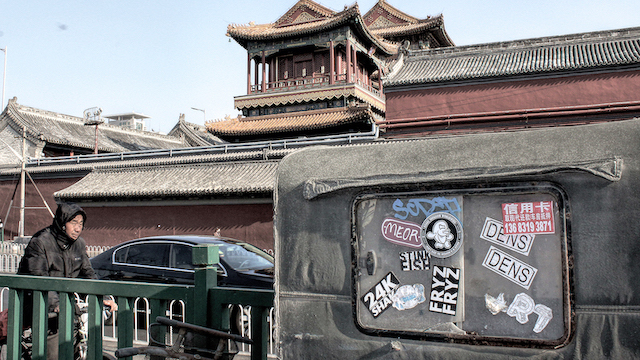 -What is the hardest part while working on a piece of art?
It depends on what you do. To me, the hardest part is to organize the posters I’m going to put up in the streets (both graphic and hand-made), cut my stencils and set everything up. It might seem easy but It’s a long work which requires a lot of patience.

-Do you have an artist(s) you admire and what for?
There are a lot of artists that I admire. I know many of them and some have influenced me in a positive way.
Speaking about the stickers/posters world I have a thing for guys with attitude, whose works are everywhere I go. I’m pretty much obsessed with that but I’m also a fan of those who don’t stick too much but create quality works. 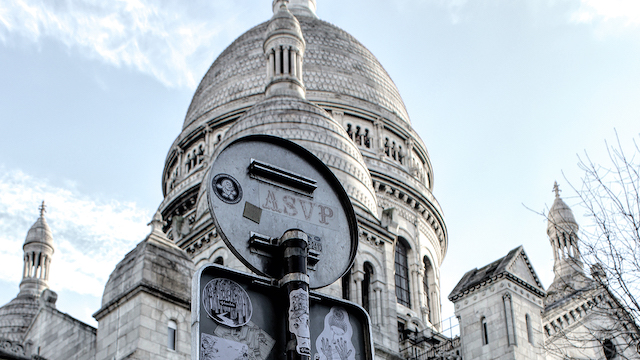 -Which cities are the most inspiring for you?
As I said, every city somehow influenced me. NYC is without any doubt, the one that most inspired me and where everything started. Madrid and Spain in general are full of great artists with whom I had awesome nights of bombing. Buenos Aires is an amazing city which gave me a lot and I wanna go back there one day. Maybe Asian cities above all, because I love that culture. I’ve been to China, Vietnam, Thailand and Japan (Tokyo) and It’s something beyond imagination. I could go on for hours telling you something about every one of them and I wouldn’t be able to stop.

-What other passions do you have apart from art?
Right now I’m mainly focused about this project. I love travelling, I like motion graphics and graphic design and the best thing is that I can combine them all within my project. When I take a break from that, I like watching football. I love football! And eating sushi, noodles or dumplings. Not too shabby!

-Do you have a wild project that you dream of achieving some day?
I want to keep on doing new things and always be ready to face new challenges. I have a list of places where the invasion has yet to come. Never stop! That’s the way you might reach your goals!

-Tell us about your art, does it include symbolisms, messages or repeated patterns?
– I don’t like promoting social messages, but my slogan “Don’t Sleep” stems from an Italian saying “chi dorme non piglia pesci”. In English it might be translated as “the early bird gets the worm”. If you want to achieve an objective, you have to work hard for it. Nobody gives you anything for free, so wake up and do it! 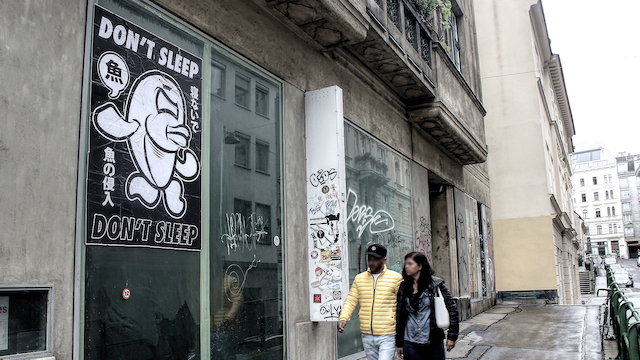 – How long time does a piece of art work of yours usually survive for?
In my case, at the moment, It’s difficult to know because It is just paper on a wall. Some posters only lasted 1 day, others up to 1 or 2 years, some are still there after 3 years! It mostly depends on the glue that I used, the place I chose and last but not least, who walked past them… Maybe one day this whole thing will develop into something else which will last longer. We’ll see…

-What do people first think of, or feel, when they see one of your works on the street?
Lots of people ask themselves what it means, what’s behind that fish but in most cases there’s nothing to understand about it. There are some who look for me wherever I go or who compete to find my works and that’s funny. I like the way that fish gets into people’s heads. Even though they don’t know what that means, they can say “I’ve already seen that fish somewhere!” 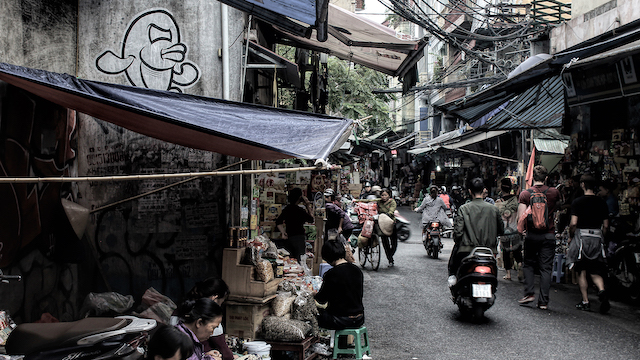 -Do you have a secret you would like to share with us? 🙂
-I want to be everywhere

-What are your creative plans for the future?
Keep on travelling and evolve myself…maybe turn into a shark

If you haven’t seen me in your town, don’t worry…I’m coming! 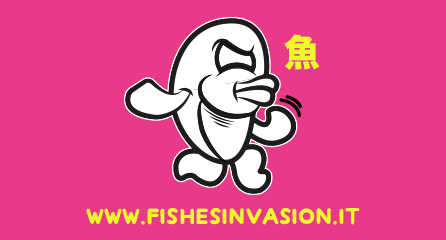 Thank you Merio! It’s been great to get to know more about the mind and person behind such talented and inspiring works. 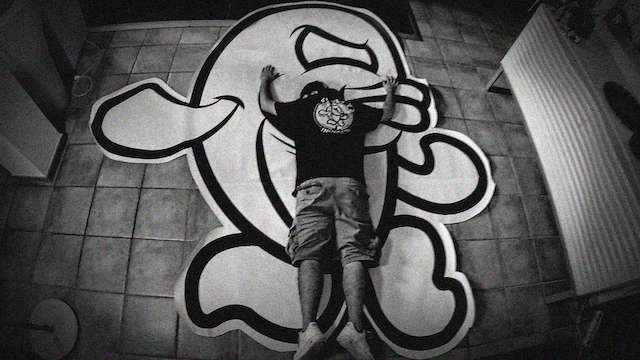