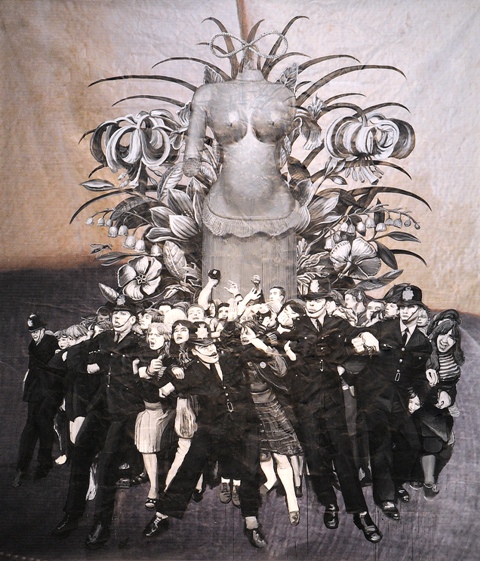 From the 21st December 2018 one should visit Pisa, at the Fortilizio and the Torre Guelfa the exhibition of one of the most illustrious contemporary artists of Pisa: “Ozmo, every wall in the city tells a story”.

Ozmo aka Gionata Gesi (Pontedera 1975) – after an exhibition in an important space in Switzerland – it is now universally recognized at the same time as one of the pioneers of Street Art in Italy and one of the few person to have driven it from the city walls to the museums. The exhibition, curated by Gian Guido Maria Grassi and Alessandro Romanini with the setting up of the architect Roberto Pasqualetti, ended a cycle of initiatives hosted in Pisa, which analyzed artistic, sociological, legal aspects and conservation of Street Art, with Italian and international experts. The exhibition is at the same time an opportunity to see the evolutionary state of his poetics with the new paintings of Ozmo and retrace his street career of artist thanks to the rich photographic and video documentation supported by a widespread descriptive apparatus that will be set up in the exhibition.

More than 50 works, including paintings and photos, will allow the viewer to understand the style and the technical and the formal evolution of the artist, based on an harmonious mixture between a recovery of the “classic” iconographic sources, supported by an in-depth analysis historical-artistic knowledge, and the subversive force of street art that maintains its own force in the transition from the wall to the canvas.

The canvases and the illustrative apparatuses clearly indicate to the user these stylistic elements to which are added the will to produce new forms of “reappropriation” neglected public spaces and the associated enhancement of them in one direction of collective fruition and creation of new dynamics of social relation.
Basically it is not an aesthetic value without a social, relational function, the works by Ozmo says.
Art is the instrument of intervention and transformation of public space and therefore social relationships as well as a precious means for quality improvement
of life. 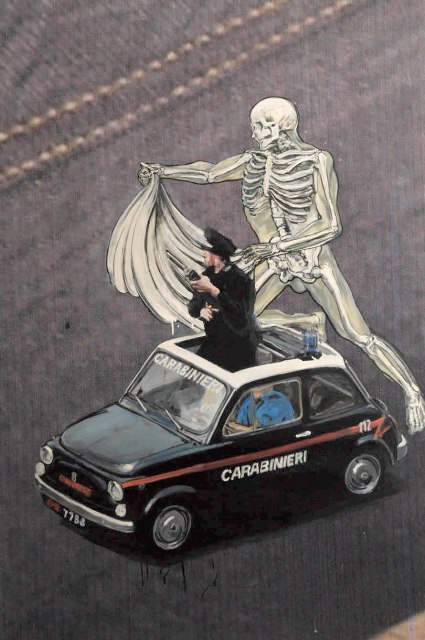 The canvases presented for the occasion shows the whole range of the figurative alphabet of Ozmo and enlightens its ability to maintain it’s personal style and the same expressive impact from the wall to the canvas, declining an articulated, multicultural and complex urban iconography.

The same formula that finds protagonist the analysis and criticism of images, of the mechanism and mass media symbols, which invade our daily perception, recombining in an encyclopedic way sources and still different.

An harmonious synthesis is also visible in the paintings on display, ranging from comics to pop art, from art to advertising, from underground iconography to the noble classical art, from cinema to TV to web and graphic design, without forget the Italian muralist-monumental tradition (Sironi docet).

“Noble” and popular sources, mainstream and underground, abstraction and wise technician know-how, talk on a horizontal level. The exhibition will also be an opportunity to present a preview of the compendium anthological catalog of Ozmo, which also traces its prestigious career artistic through a substantial group of public works and interventions. Those interventions in urban areas, which have seen him protagonist in the 5 continents, from Milan to Miami, from London to Warsaw, from New York to Shanghai to name a few. 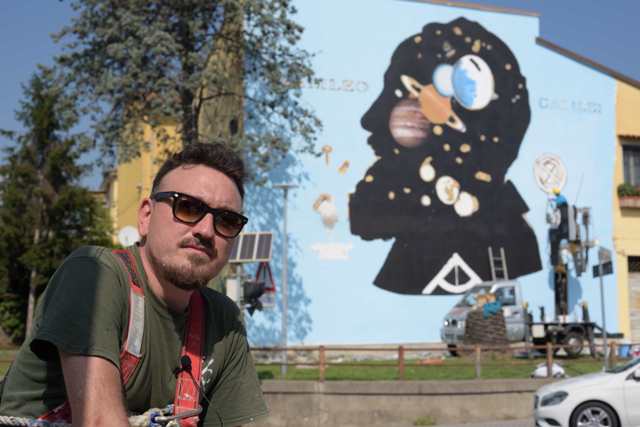 The Pisan exhibition and the catalog, illustrate the creative evolution of Ozmo, from the “militant” muralist interventions at Leoncavallo (defined by Vittorio Sgarbi “La Sistine Chapel of the Street Art “), passing through the” conquest “of the temples of the art contemporary as the Macro of Rome (which also hosts one of his mural permanent works) and the Museo del Novecento in Milan, up to the recent interventions Pisa (“Portrait of Pi” and the iconographic “Portrait of Galileo”).

An exhibition that sanctions a sort of virtuous closure of a circle and celebration of the 30th anniversary, which saw Pisa protagonist since the now legendary Keith Haring’s intervention in 1989, to continue in the 90s with the convention Panico Totale event dedicated to the culture of hip hop and Graffiti writing and in recent times with other events such as the Start festival -Welcome to Pisa in at which 20 murals at Porta a Mare have already been realized.

Through the Ozmo experience the exhibition intends to bear witness and become aware of these experiences that belong to what it is perhaps the global movement currently more disruptive of contemporary art, the Street art, which has had one of its main Italian and European centers in Pisa.
A virtuous passage of the witness, which shows us in the historical exhibition spaces,
as, thanks to characters like Ozmo, the epiphenomenal linked street art underground and suburban metropolitan areas has become a real expressive language, overcoming the mere subversion to acquire a project and a wealth of visual solutions that earned her the right to citizenship in the world of contemporary art.

Ozmo was able to add to the recipe that sociological quid and knowledge of the mechanisms of perception, which allowed him to create a sort of democratic “open-air museum”, fed non-stop, which offers the same way to the man in the street and to the art enthusiast and museum visitor possibility of enjoying innovative aesthetic and thought experiences.
The exhibition, realized by Start-Open your eyes, with the contribution of the Municipality of Pisa, the Pisa Foundation and the collaboration of the University of Pisa, of the Foundation Palazzo Blu and the Regional Council of Tuscany will be an important occasion to visit also the fascinating spaces of the Citadel overlooking the Lungarno: from the top of the Guelph tower, open specifically for the occasion, it will be possible to enjoy the most beautiful view of the whole city. Since the origins of man, walls tell stories. Today, street art and Ozmo continue to tell stories, to infinity. 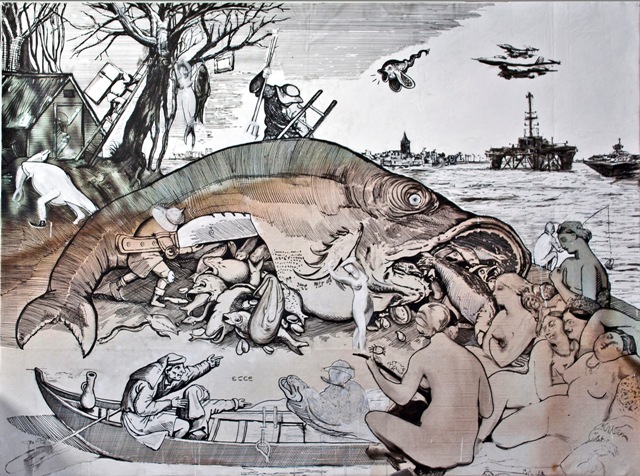 OZMO (Gionata Gesi), born in Pontedera in 1975, trained at the Academy of Fine arts of Florence and, after a debut in the world of comics, focuses on painting and on writing; in 2001 he moved to Milan where he participated as a protagonist at innovative ideas and the rending currents of his generation, laying the foundations together with a group of friends of what would become the Italian street art:  these years remains the emblem of Leoncavallo, where he painted part of that that Sgarbi has defined the “Sistine Chapel of modernity”; he loves however to come back in Tuscany and has already honored his hometown with “the portrait of PI” and the iconographic “portrait of Galileo Galilei”. His visual figurative research is expressed variously (with graffiti, installations, canvases, …) and is imaginative; draws from tradition with a “renaissance” sensibility and frequently refers to sources a citations that “remix” with imagination in a personal and contemporary way elevating them often to symbols and encyclopedic references: “fantasy is the invisible glue that binds everything.

The X elements, from the tradition, not necessarily artistic, are things that exist independently of my drawings, which meeting in everyday life and then also in artistic practice. At the base though there is the fascination for images, it is something that I suffer as a child and it is the attitude that moves everything. For a few years I also stopped drawing in mind, in the sense that the fact of being able to draw not only from my imagination but also from external images was an idea that gave me a lot of ideas and has me allowed to act in a neutral way … a bit like the figures that they were ready-made copies. And then there was also the appearance of the theft, or rather of appropriating indirectly first of all urban spaces and then also sources, take back some famous paintings … “. His public works are present in places of all continents (from Miami to Shanghai) and among the museum sites prestigious that have hosted its many exhibitions mention the Museum of the Novecento of Milan and the MACRO on which he made a permanent work. http://www.ozmo.it/