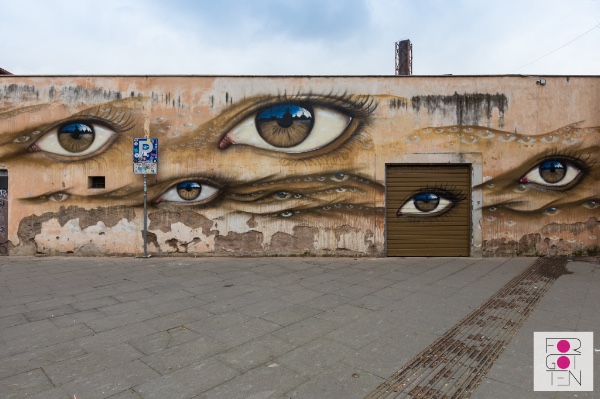 The hospital in Trastevere hosts the first mural of the second edition of the urban project born to reclaim the value of urban heritage. A different view of the city, of Trastevere and of health structures in Rome.

The English street artist My Dog Sighs borrows his art to Forgotten Project by painting on the surrounding wall of Nuovo Regina Margherita of ASL Roma 1, in Via Morosini.
The artwork, titled “I still remember how it was before”, is strongly linked to its location. After researching the building from several points of view (architectural, anthropological and social) and studying the transformations it has had over time, My Dog Sighs painted 540 of his iconic eyes, in which there is the reflection of the wall itself and of Rome’s skyline. 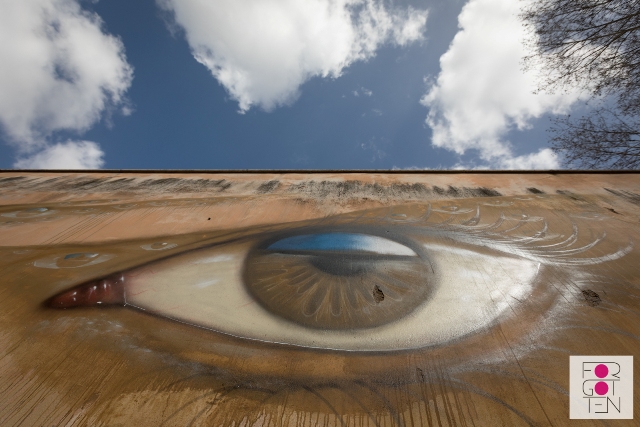 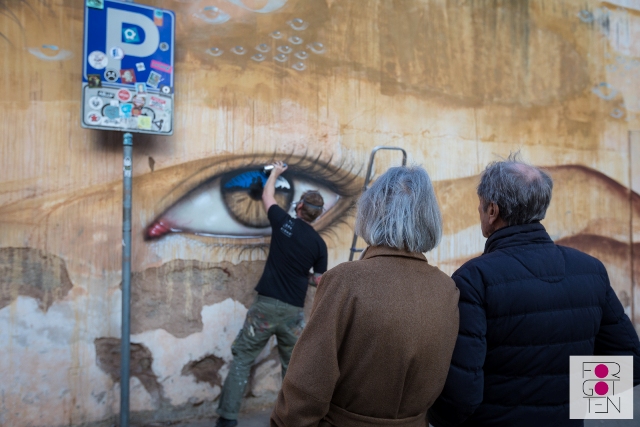 The street artist from Portsmouth did an open call in order to collect photos of local people who had a story connected with the hospital, of whom he draw the silhouettes into the reflections in the eyes. “Every eye tells the story of the community and of the place that has taken care of each of them. Forgotten Project is an interesting project and to paint the wall I had to understand both the location and the local community first” My Dog Sighs said. 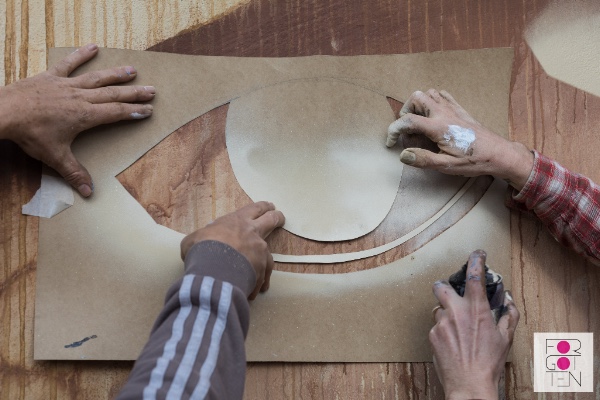 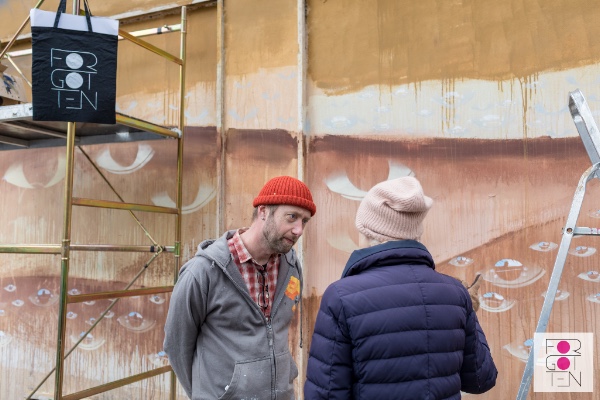 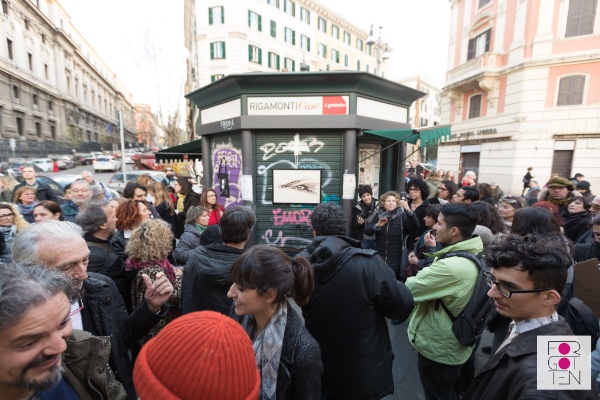 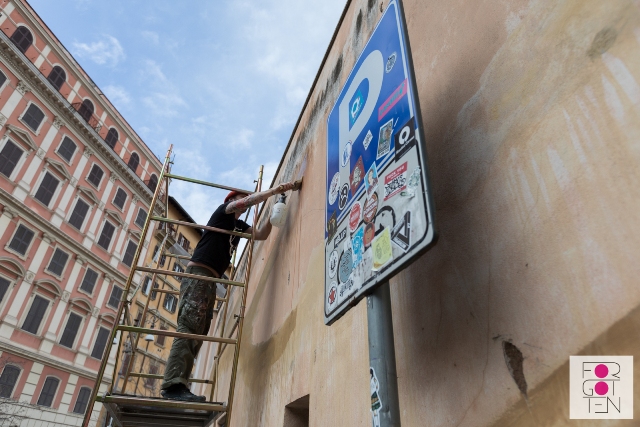 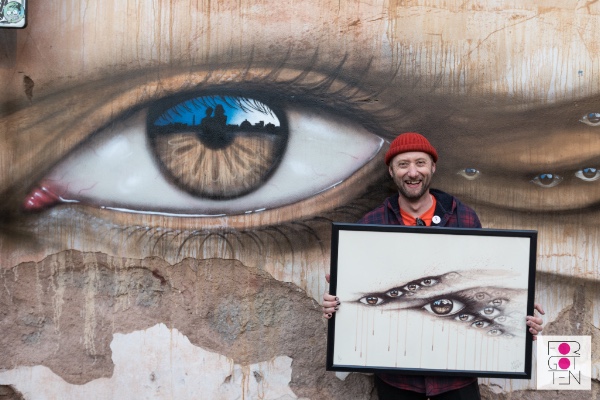 A program of events led to the inauguration on Saturday March 17th, which was crowded with people. After a tour of Forgotten hospitals in the center of Rome, from Santo Spirito to Nuovo Regina Margherita walking past the San Gallicano, Forgotten Project organized the first Free Art Friday in Rome as a tribute to My Dog Sighs: wandering around Trastevere, people could stumble upon more than 200 free artworks, left by national and international artists for those who wanted to bring them home for free. It has been a nice way to involve both artists and citizens, who were invited to pay attention to what is around them. My Dog Sighs’ artwork has been brought on paper too, with the realization of a limited edition of silk prints heavily hand finished. The silkprints, which are available at www.forgottenproject.it, will help the fundraising of the project, which will carry on by inviting three more big names from Britain: Lucy McLauchlan, Dan Kitchener e Phlegm. 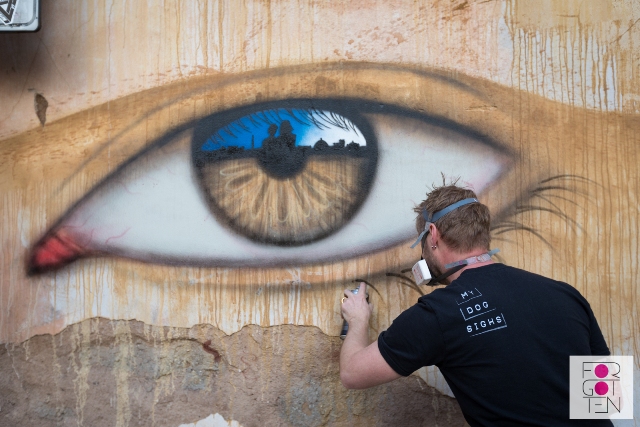 Above Photos by Stefano Corso.

About Forgotten
Forgotten Project was born in 2015 and after the first edition focused on Portugal, this year chooses United Kingdom. Considering the attention reserved in recent years to the Banksy phenomenon, aware of the expansion of the various festivals in different areas of the country, wanting to emphasize the role that the city of London has historically had, and continues to have, of European cradle of street art, the choice of United Kingdom has seemed the most natural – facing to the gap of British artists that the open-air museum of Rome currently presents.
Artists representing different currents and themes have been selected.
The walls of the second edition will be signed by artists like Dan Kitchener, Lucy McLauchlan, My Dog Sighs and Phlegm, who are going to create their first urban artwork in Rome.
Forgotten Project was born to enhance Rome’s contemporary architecture through urban art.

The first edition focused on old factories, closed down cinemas, small stations, local markets and abandoned. The ex fabbrica Mira-Lanza, Sala Troisi, San Pietro Station and ex-SIAR area have been the exceptional location for the artworks of 5 portuguese artists Add Fuel, Frederico Draw, Miguel Januário (±MaisMenos±), Bordalo II e Daniel Eime.
The interventions of the first edition where showed in the exhibition “Forgotten … (THE EXHIBITION)” at the MACRO Testaccio and in the Forgotten Catalog 2015/16.
Forgotten Project is part of the Technical Table on Urban Creativity promoted by Inward.
Has participated in several conferences including Urban Talks and the 2017 Public Space Biennal.
Recently has received a special mention during the Institutional Art Awards 2017 and Art Doc Fest 2017. 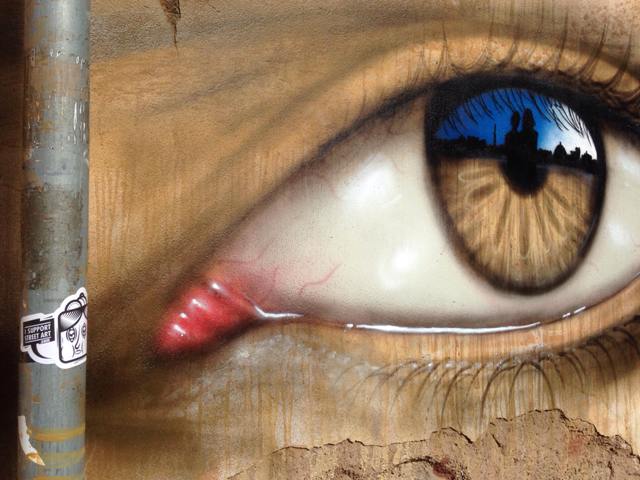 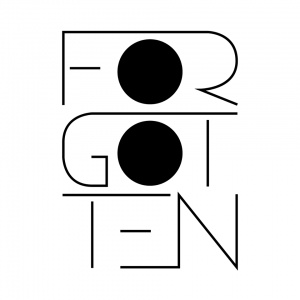