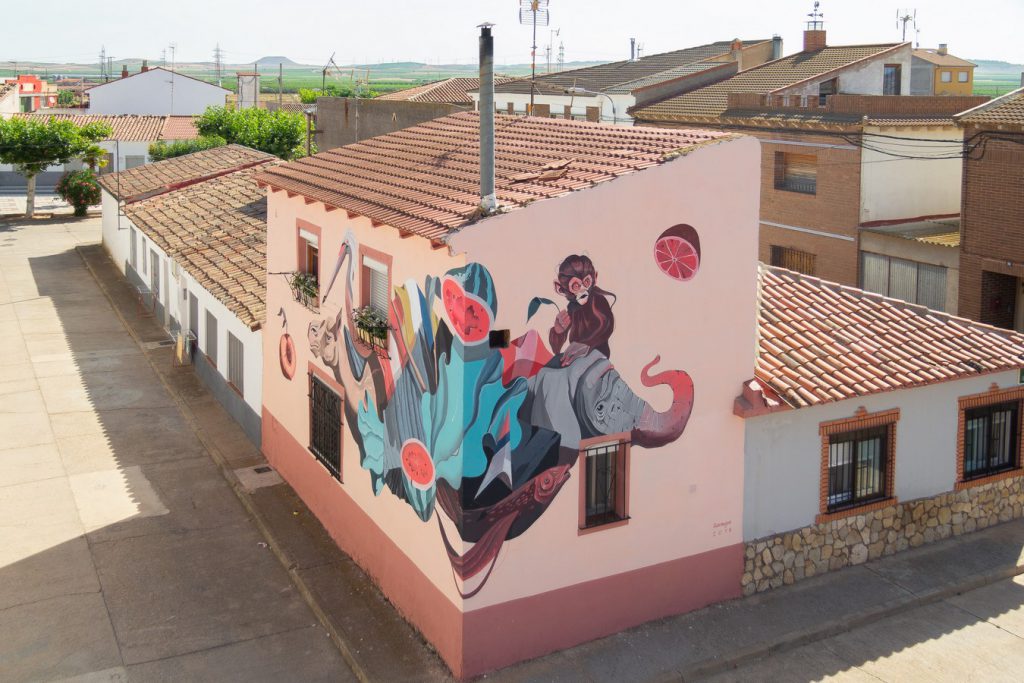 The litle town Alfamén (Spain) has hosted for the second consecutive year an urban art festival with international artists. The Asalto team organizes this meeting of artists in rural areas to promote the art in small villages.

If there is an urban art festival in which the artists are integrated with the population, that is “Asalto en Alfamén”, a summer meeting that this year has celebrated its second edition. Throughout a week, the artists Cristian Blanxer, Roc Blackblock, Elisa Capdevila, Sojo, Anna Taratiel, Zësar Bahamonte and the Twee Muizen team have lived the essence of Alfamén to leave it in its walls.

Endorsed by the team that leads the Festival Asalto for 13 years in Zaragoza (Spain), this festival adds to the work of the artists, the coexistence with the neighbors of the town; most of the works that are made are inspired by the history of its inhabitants, its natural environment and even its economy. As Zësar Bahamonte explains, “here there is a more direct and natural communication, and people want to tell the stories of the people”

Cristian Blanxer. With his work for the Festival, Cristian Blanxer pays homage to local women, workers of the only factory that has existed in the town. At the same time, it introduces the element of water, by placing its protagonist in a laundry that exceeds the limits of the wall. Blanxer impacts with this work. 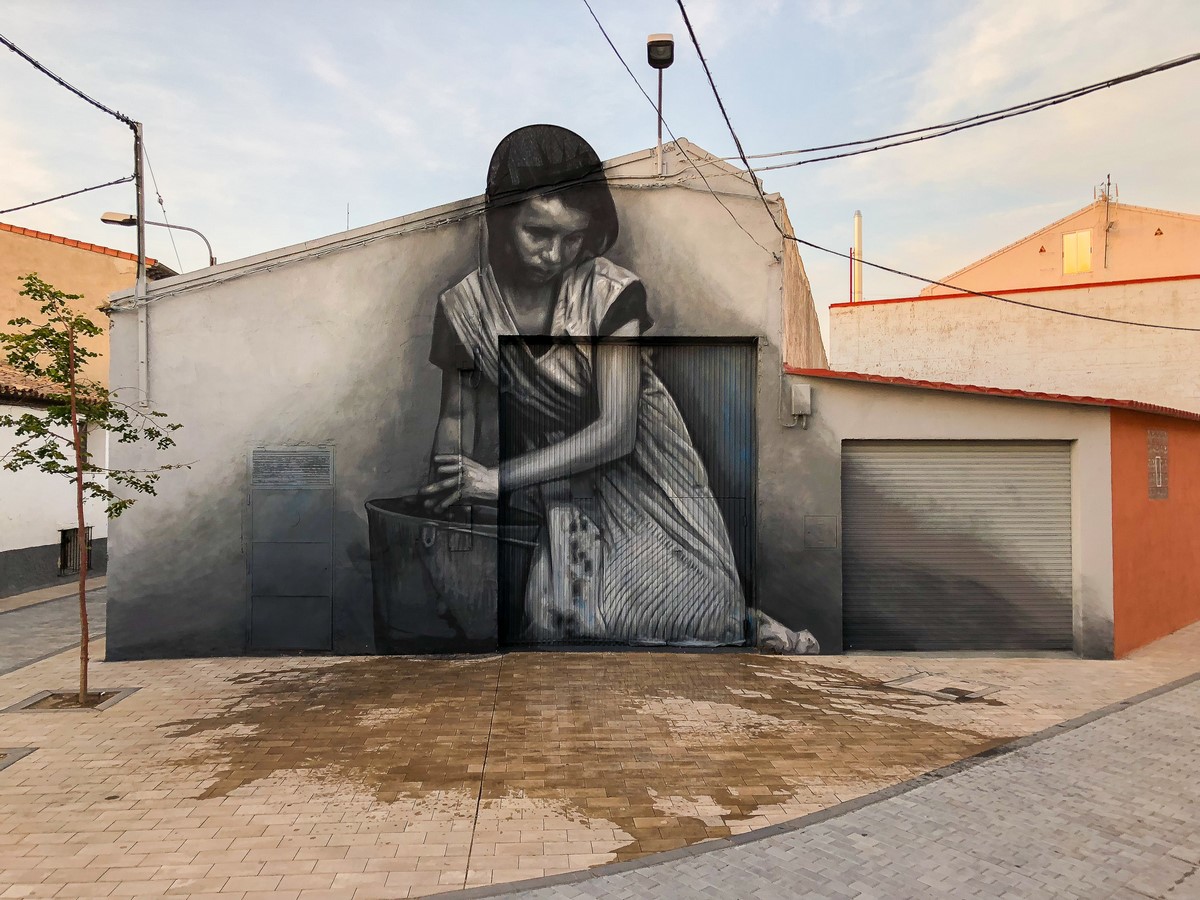 Roc Blackblock. This artist has made during the festival two works very rooted with Alfamén. The first follows the technique of stencil, habitual in his work and represents the pillars of the people, water and land. “In rural areas, an object with as much tradition as a botijo, embodies very well what I wanted to say,” explains the artist. In the background, a piece of crochet and the arid landscape of the region. 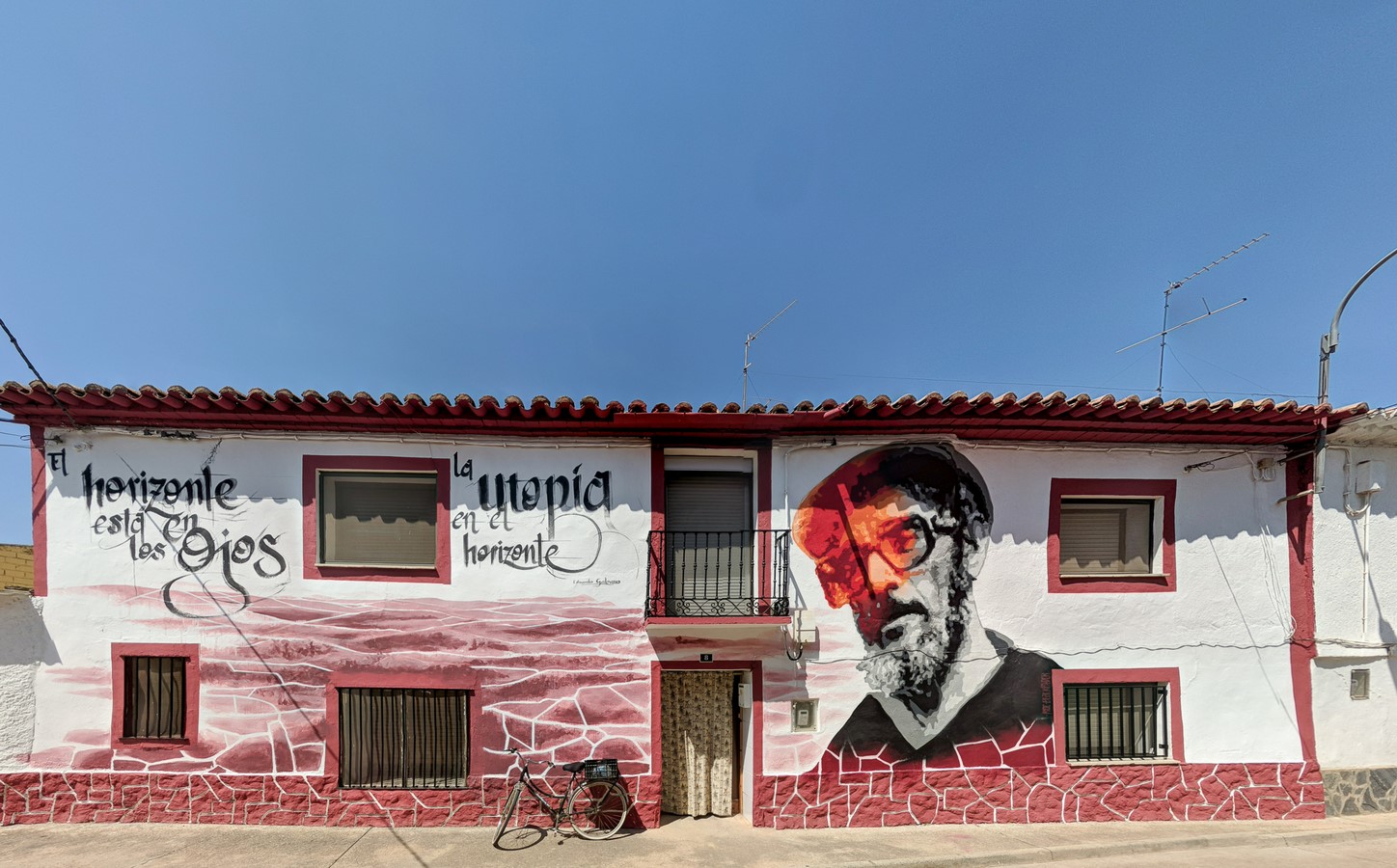 The artist’s second mural embodies the “priest Pérez”, a character born in Alfamén who was known as the red priest and who traveled to Latin America in the 70s, becoming a leader of the National Liberation Army. “I try to convey the impression of how someone from a town like this, ends up in Colombia leading an armed struggle, was a person with a perspective of the world with horizons. Without entering into the focus of what I was doing, I wanted to look for the essence of the character and reflect the chiaroscuro that each one puts, according to their judgment “.

Elisa Capdevila. According to the artist, this work offers “an intimate and quite introspective image, like all I do”. This self-portrait looking at a sunflower represents introspection, a universal theme in a beautiful image is enough for the artist. She gives great importance to the brushstrokes, the color and the atmosphere that she manages to recreate.

Sojo. With a wall in vertical format, Sojo has made a great figure of an older man, “it is interesting to see how a normal person and paint it to the beast and dignify it, put the point of attention in it.” In this way, he wants to reinforce an idea: the respect due to the elderly. The figure, of a person who is still alive, is placed in opposition to the dividing wall of a house that has been demolished and from which we can see traces (a wallpaper, tiling, the trace of the partitions …). Sojo is an artist who works with a diversity of languages and in this case has gone more towards graffiti, “more dynamic, halfway with the illustration and with harder contour lines,” he explains. 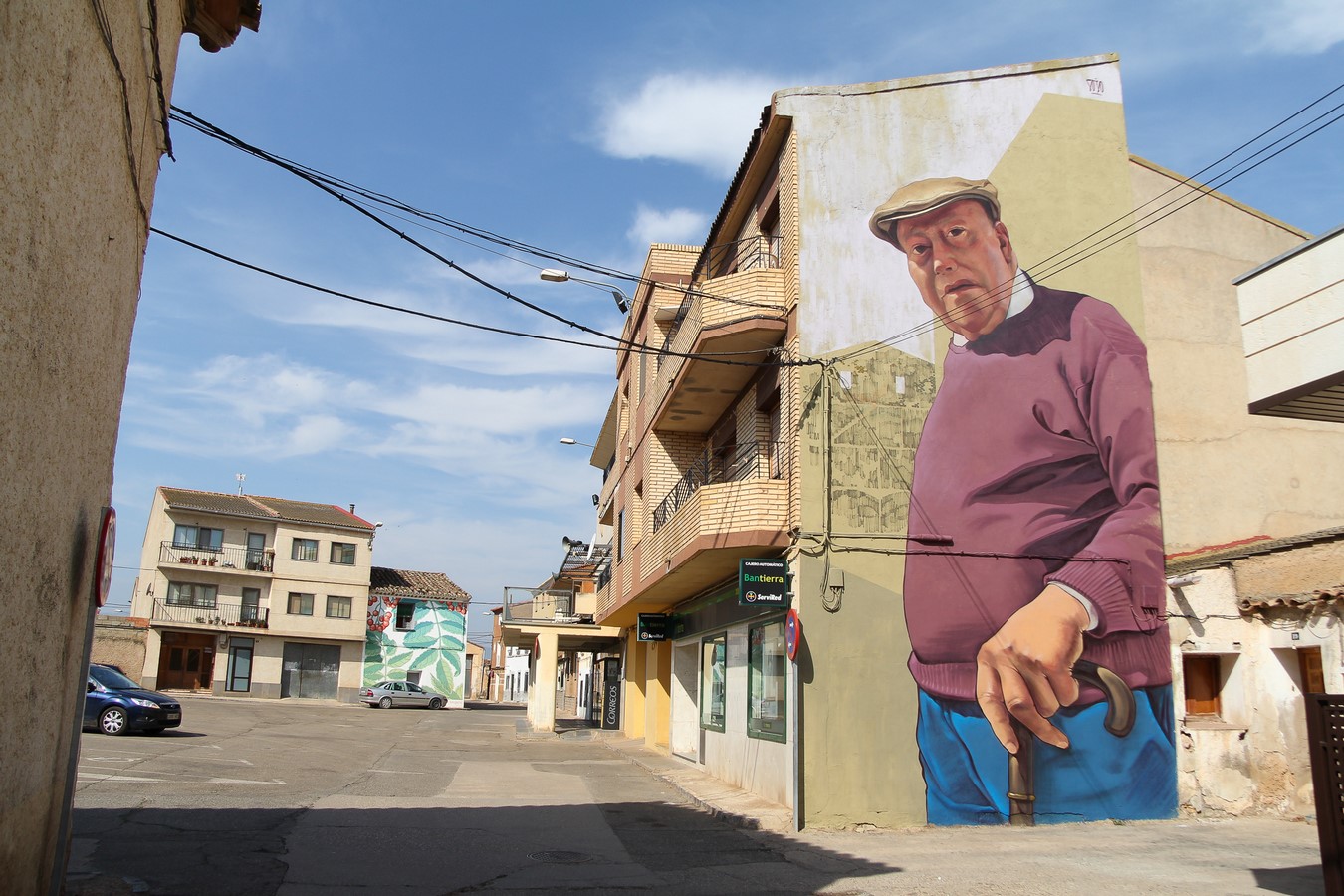 Anna Taratiel. Taratiel plays with movement and colour in this work. With a geometric drawing made in three volumes that acquire uniformity when you look at them from a point. With movement, unity is undone and each work is unique. Inspired by colors of the environment, the international artist offers us an abstract image for one of the nerve centers of the town. 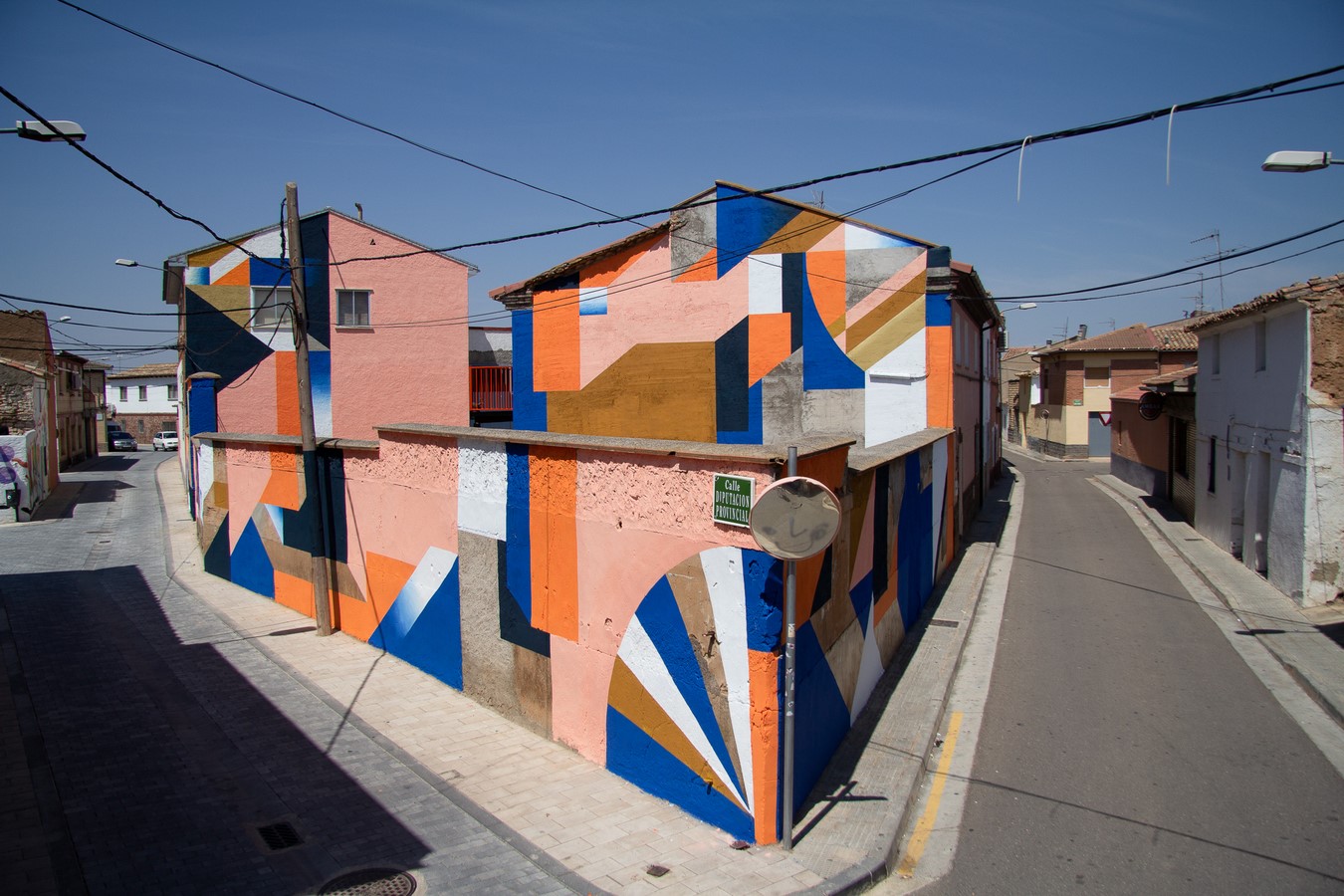 Zësar Bahamonte. The Sevillian artist has found in the different nationalities that live in the locality, an argument for his work. In this mural he makes an allegory of the farming work mixing different people: autochthonous characters and communities of emigrants. “The idea is to talk about the field as a union of different people who need each other to carry out a task”.

Twee Muizen. This still life of fauna and flora has great significance within the work of this artistic couple. With the family as a central point, he makes an analogy of its members with the animals, representing a camel coming from the Sahara. The work envelops a small village house in a poetic way. 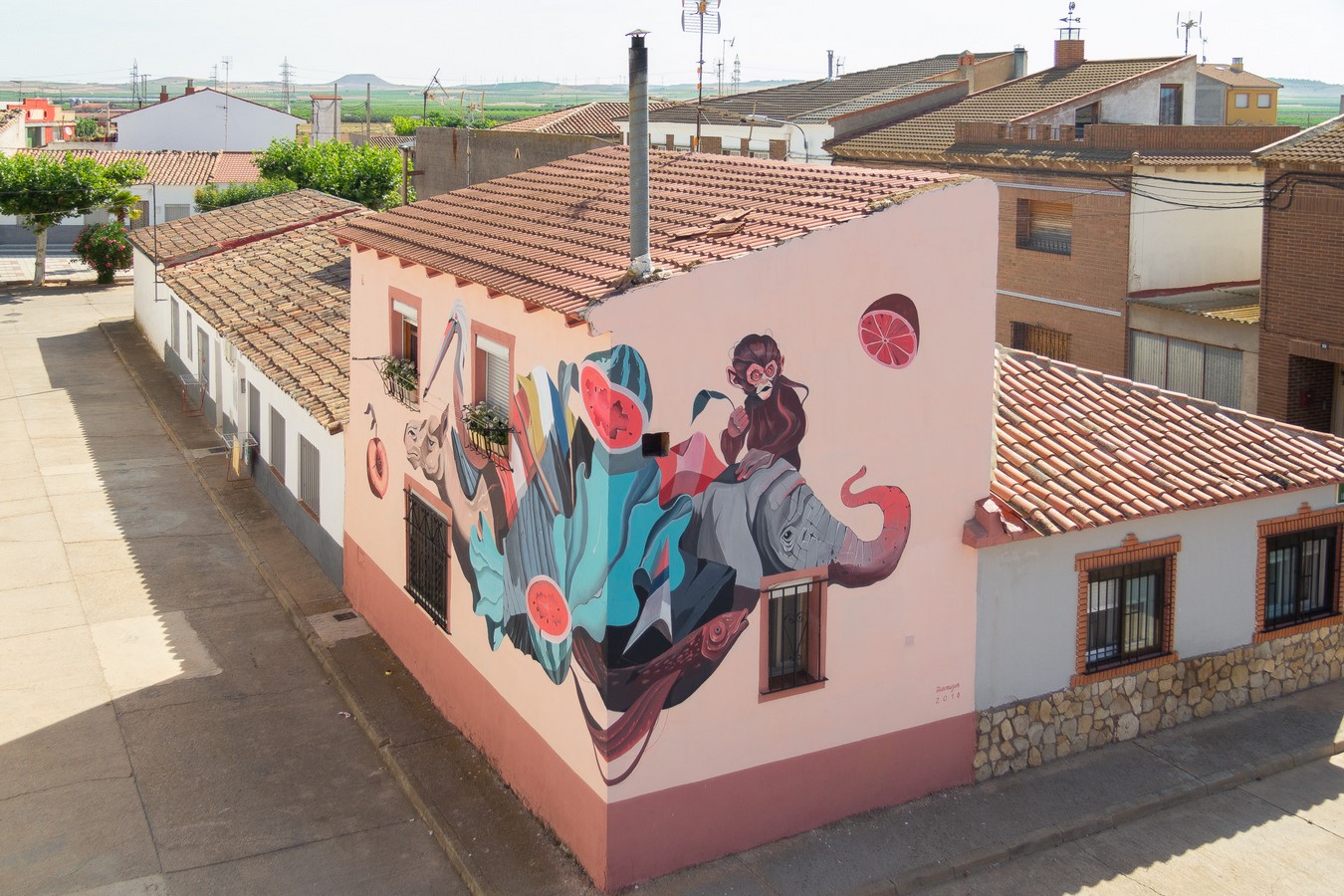 Asalto.org, art for the people

For the organization, the Asalto team, this festival is an example of how the presence of artists and their works should be integrated into the environment in which they work. An innovative project in rural areas that increasingly interests artists. Alfredo Martínez, Organizer “Assault on Alfamén” explains: “taking into account the vision of the Assault Association, projects of this type ratify our approach and our objectives. Today, more than ever, more leisurely projects are needed and there is a connection with people and the context. Thus, neighbors generate new points of inspiration. “

This is the spirit that guides the Festival Asalto which has been held in Zaragoza since 2005. The 2018 edition that will take place in the Oliver neighborhood, is preceded by a series of projects designed by the citizens to improve their environment.